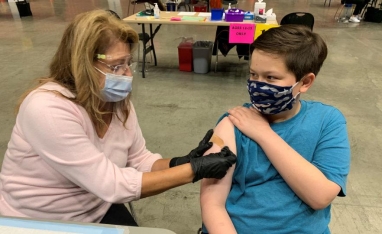 February 8, 2022 (San Diego) – Senate Bill 866, the Teens Choose Vaccines Act introduced on January 21 by California State Senator Scott Wiener, a Democrat, would allow young people age 12 and up to receive vaccines for COVID-19 and other serious illnesses without parental consent. The bill, which is sparking conflicts among public health experts and parental choice advocates, has not yet been scheduled for hearing.

The measure has sparked an outpouring of support from medical leaders and teen advocacy groups, but opposition from Republicans in the state Legislature and Congress, including San Diego’s Republican Congressman Darrell Issa.

Several states already allow minors to receive vaccines without parental consent, including conservative states such as Alabama and South Carolina as well as liberal areas such as Oregon, Rhode Island and Washington D.C.

California teens are currently allowed to get some medical treatments without parental consent, including vaccines for sexually transmitted diseases, productive healthcare and mental health services. SB 866 would expand that to include all vaccines approved by the U.S. Food and Drug Administration (FDA) that meet recommendations of the Advisory Committee on Immunization Practices at the Centers for Disease Control and Prevention.

“Giving young people the autonomy to receive life-saving vaccines, regardless of their parents’ beliefs or work schedules, is essential for their physical and mental health,” says Senator Wiener. “COVID-19 is a deadly virus for the unvaccinated, and it’s unconscionable for teens to be blocked from the vaccine because a parent either refuses or cannot take their child to a vaccination site. So many teens want to be vaccinated so that they can lead a more normal life — participating in sports or band, traveling, going to friends’ homes — but they’re prevented from doing so due to their parents’ political views or inability to find the time.”

He adds, “Unvaccinated teens also make schools less safe and threaten our ability to keep schools open...Young Californians should also have the right to keep themselves healthy and safe.”  Low-income children may experience longer waits to get vaccinated because their parents may work longer hours — often without paid time off — and can’t take them to get vaccinated as soon as they are eligible, Senator Wiener notes.

Over a quarter of young people ages 12 and 17 — nearly a million young people — have not received the COVID-19 vaccines eve amid the fast-spreading Omicron variant. These low vaccination rates can have dire consequences for teens; a recent study found that almost all teenagers who needed intensive care for COVID-19 were unvaccinated, and all who died were unvaccinated.

Vaccine skepticism and misinformation has implications beyond the COVID-19 pandemic. Measles, once thought to be eliminated in the U.S., has resurfaced by spreading among unvaccinated youths, whose parents opted against allowing them to receive the potentially life-saving measles vaccine.

Wendy Bloom is a registered nurse at Benioff Children’s Hospital in Oakland, where she works in an outpatient infusion center caring for immunocompromised children with conditions such as cancer as well as bone marrow transplant patients who are extremely vulnerable.

“I have on more than one occasion spoken with teens in these circumstances that want to be vaccinated for COVID-19. Many can’t even go to school due to their state of vulnerability. I have tried to convince their skeptical parents that vaccinating them is so important to protect them. The teens totally understand it and want to get it but without parental approval they have no choice but to remain unvaccinated,” Bloom says.  “Senator Wiener’s bill is critical to help these teens.”

Nyla, 7th grade student in San Francisco. states, “I can’t think of a good reason why laws shouldn’t let people my age choose to lower our risk of getting really sick. And vaccines not only make us safer, they keep our friends and family safe, too.”

“We appreciate Senator Wiener hearing teen voices in California and around the country,” said Crystal Strait, Board Chair, ProtectUS, who argues that teens should “have the right to protect themselves from preventable death and disability.”

Dr. Charles Irwin, a pediatrician at U.C. San Francisco Benioff Children’s Hospital, also supports the bill. “Laws should enhance access to care and not create barriers to getting essential care,” he says.

The California Republican delegation led by GOP leader Kevin McCarthy and joined by Congressman Issa have sent a letter to the leaders of the state Legislature voicing their opposition to SB 866.

“California and its Democratic leaders have relentlessly undermined, disregarded, and attacked parent’s rights,” said Issa. “Mothers and fathers are silenced at school board meetings, forced to mask their kids, and now may face the risk of their children being jabbed without their knowledge or consent. This extreme legislation is a further insult to parents in California and, quite frankly, across the country.”

Republicans in Congress, meanwhile, are trying to add language into a federal budget bill that would block funding from school districts that allow vaccinations without parental consent.

Congressman Issa also independently wrote a letter to Governor Newsom urging him to oppose SB 866. That letter can be viewed here.

criminal Issa knows more than anyone else!! why isn't this right winger in jail???