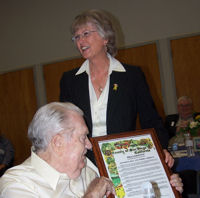 January 26, 2011 (La Mesa)--Officials of many East County organizations recognized the contributions made by Bill and Norma Verbeck at a special luncheon eeting of the Kiwanis Club of La Mesa today at the La Mesa Community Center.
Bill Verbeck was awarded the Kiwanis International 50-Year Legion of Honor at the meeting. Tony Zambelli, president of the La Mesa Kiwanis Club, mad the presentation.

Over the years, the Verbecks, who were owners of Grossmont Escrow before retiring, have made significant financial donations to the East County Boys & Girls Club, the Home of Guiding Hands, the Grossmont Hospital Foundation, the Jarrett Meeker Foundation, and the Water Conservation Garden at Cuyamaca College.

In association with the La Mesa Kiwanis Foundation, the Verbecks have donated to the club’s annual scholarship program for graduating seniors from Helix and Grossmont High Schools, as well as the Chubby Sykes Memorial Scholarship Fund for vocational scholarships for graduates of Chaparral High School.  A total of 15 college scholarships are awarded annually through these programs.

Through Grossmont Escrow, the Verbecks are also a major sponsor of the Drew Ford/Kiwanis Club of La Mesa Soap Box Derby Races which have taken place three times each year for the past ten years. Immediate Past President and Derby Director Dennis Wilkes will be Master of Ceremonies at the luncheon.

Contributions to the Grossmont Hospital Foundation include funding toward the William and Norma Verbeck Tomography Cancer Treatment Center.  One of the homes for developmentally delayed residents of Home of Guiding Hands as some facilities at the Boys & Girls Club bears the Verbeck name, as well. 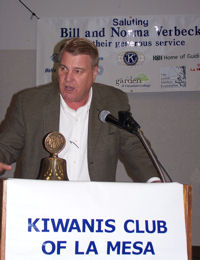 Speaking at the luncheon, in addition to representatives of each of these beneficiaries of the Verbecks’ generosity, were be 2nd District County Supervisor Dianne Jacob and City of La Mesa Mayor Art Madrid.  Madrid will present the Verbecks with a “Walk of Fame” plaque.

Other speakers included Joe Drew, owner of Drew Auto, and Caren Gage, co-owner of Grossmont Escrow. In addition,Bob Friedgen, retired generalmanager, will speak about Verbeck’s service to the district, since in the 1980s Bill Verbeck sered a four-year term as an elected member of the Helix Water District Governing Board.