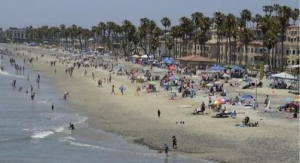 June 1, 2016 (San Diego) -- Smoking or vaping at state beaches and parks, or disposing of tobacco products at these locations, may soon be illegal under Senate Bill 1333, a measure authored by Senator Marty Block, a San Diego Democrat.  The measure passed the State Senate by a 25 to 11 bipartisan vote this week and next heads to the Assembly.

Senator Block says, “We have an obligation to value and preserve our environmental treasures. SB 1333 will help to keep our state parks and beaches clean and safe by removing exposure to second hand smoke and in reducing the threat of park fires.”

He added that cigarette litter poses a detrimental effect on the environment and wildlife. “Cigarettes are non-biodegradable and contain more than 164 toxic chemicals which create a substantial trash and health issue at beaches and parks,” the Senator noted, adding, “They can be ingested by wildlife and fish which leads to the contamination of our oceans and waterways.”

SB 1333 would make it an infraction to dispose used cigarettes or tobacco waste in parks or waterways and impose a maximum fine of $250 for a violation of the law. The bill also requires the Department of Parks and Recreation to post signs notifying park and beach goers of the smoking ban.