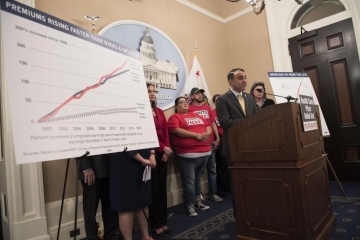 The bill by Assemblymember Ash Kalra (D-San Jose) is backed by labor and consumer groups, but opposed by the California Medical Association, California Hospital Association, and numerous other medical groups. Supporters say it’s needed to protect consumers from medical costs spiraling out of control, while opponents say it could drive physicians out of state or into early retirement, limiting access to providers while having only limited impact on healthcare costs.

Anthony Wright, executive director of Health Access California, a patient advocacy group co-sponsoring the legislation, writes in a Sacramento Bee editorial that the bill aims to “provide a fair, but not inflated, rate to doctors, hospitals and health plans – and to stop health care price-gouging.”

Another co-sponsor is the California Labor Federation. Steve Smith, on the CLF’s Labor’s Edge blog, writes, “Out of control health care prices have created a crisis that is squeezing families, businesses and patients. There’s no rhyme or reason to health care prices, and very little transparency. That needs to change.”

He cites a University of Chicago study which found over 40 percent of Americans skipped a doctor visit when they were sick or injured in the past year, with over half of adults putting off procedures due to high costs.  Smith says healthcare deductibles have increased six times faster than wages since 2010, hitting working families hard.

Advocates note that patients in the U.S. pay more for healthcare compared to all other developed countries around the world – as much as 20 times more, Smith says. Other countries worldwide and the U.S. Medicare system all establish fair prices that allow providers a reasonable profit while keeping rates affordable to consumers, supporters says, and AB 3087 would use a similar model that includes a process for doctors and hospitals to adjust prices if necessary.

A survey of 345 California physicians, conducted by CMA which has 23,000 members, found 92% oppose AB 3087 and 59% said it would force them to leave California to practice elsewhere.   Of the 81% who currently serve Medi-Cal patients, 635 said they believe the bill would force them to decrease the number of Medi-Cal patients that they serve and 60% feel the bill would exacerbate California’s physician shortage.

An estimate by the California Hospital Association claims the bill would cause an estimated 175,000 hospital workers to lose jobs and force many hospitals and medical practices to close.

CHA president and CEO Carmela Coyle says, “AB 3087 is a big, bad bill for the health of California.  “All this bill does is to say what price people are going to pay for a service; it does nothing to address the underlying costs of care” though she does not clarify what those underlying costs are, beyond the prices charged by hospitals and physicians. She estimates the bill would leave 60% of hospitals in the red, adding, “Access to health care services for all Californians would be at risk if AB 3087 is enacted.

I've seen good and Bad... My XW was A Medical Coder , I've heard the 500.00 aspirin and other charges that would blow anyone's mind. It's when you look at the ladder that creates that charge for a 500.00 aspirin you start to see the fat cats feed money. I Have very good Insurance, but I pay for it! More than I think I should have to as most of it goes to paying for those that cannot. Doctors getting Paid lots of money? Grandfather like most, if your not running your own practice an impossible fact without insurance backers. The Big Corporate Companies are what run the healthcare, Mind you now with donations from private citizens donating millions to causes. The Big Corporate companies are in charge of something larger than our own government. A doctor can get good money so earned but he/she also work in a Walmart atmosphere like everyone, Bottom line save and move to the next Number in line. It works here NHA does not. Touched a nerve the article did, pay for those that cannot or leave California attitude. and get stuck with poor as for paying for poor service everyone.
I thought insurance companies and Medi-Cal already controlled the costs of medical services, etc. ? At least to some degree. Maybe I'm wrong. Yet I do think the price for some services and in particular medicines are quite expensive. Don't know about doctors salaries, but they probably get paid a lot. Hospitals have been caught inflating the price of inexpensive things, so...