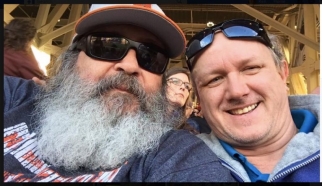 But the good he did in a five-decade career was being remembered most as word of his death Wednesday rocketed around the horn.

“He was the best high school sportswriter in the history of San Diego County,” tweeted Steve Dolan, a longtime San Diego State sports information staffer and broadcast veteran. “East County prep sports won’t be the same without him.”

An El Cajon resident famed for his “Fearless Forecaster” column and for co-founding EastCountySports.com in 2001, Dickens was 68. 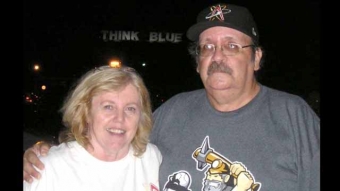 Photo, right:  Bill and Wanda Dickens were married 20 years. She would help him file stories for East County Sports, his son said. Photo via Facebook

Dickens died a little after 3 p.m. at Mission Hills Post Acute Care, said David Dickens, the eldest of his three children. Also at his side were his wife, Wanda, and daughter Katy.

“I was talking to him [Tuesday] and he was fine,” said David, 43, of El Cajon. “And today I got a call from acute care and they said you should get down here right away.”

He said his father suffered dementia and internal health problems after losing his balance in “a rickety press box,” falling and hitting the back of his head a year ago while covering a Grossmont College football game in El Cajon.

The San Diego Union-Tribune reported that private services are set for December, but a public celebration of life will be at 11 a.m. Saturday, Dec. 16, on the baseball field at Grossmont High School.

On Wednesday, Dickens was mourned as “a secret legend in the East County” by El Capitan High School coach Frank Quinones.

Ron Burner Sr. of Lakeside, head football coach at El Capitan, called Dickens a good friend and “an institution for all of us in East County sports … always there for the youth of East County.”

Burner hailed Dickens for a memory so good “you could ask him [the] history of any East County team or sport and he had the answer.”

“He was always a big supporter of me and my teams and loved to listen to my stories and then we would talk for hours about sports,” he said on Facebook.

Karen Pearlman, an East County reporter for The San Diego Union-Tribune, called Dickens one of the best friends she’s ever had.

“I would not be where I am, who I am, how I am… without him,” she said on Facebook, crediting him for giving her “my first real shot at being a reporter, at The Daily Californian back in 1986” when she was 20.

William Dickens was born March 6, 1949, in Los Angeles to a Rolling Hills couple with the last name DeLavalle, David Dickens said in a phone interview.

Bill’s biological parents had many children and chose to give him up for adoption, he said.

Jeanne and Charles Dickens picked up Bill when he was about a week old after “waiting for a child for quite sometime,” David said. “They saw him and fell in love with him pretty quickly and took him home” to Mount Helix.

He attended La Mesa schools, including four years at Grossmont High School, where he graduated in 1967.

“He had the size, but he wasn’t interested [in football] the way he was baseball,” his son noted, saying his dad called it “the best sport there is.”

(As a child, David was told, his father used to announce his own fantasy baseball games, especially the Dodgers. An East County baseball tournament would be named after him.)

Dickens attended Grossmont College but didn’t start writing until he got to SDSU, where he made money stocking cigarette vending machines.

In 1970, a year before college graduation, he married Barbara Blank, a Grossmont High valedictorian he had been “courting” since junior high. She also attended SDSU.

His third marriage, to Wanda, began in July 1997. Dickens leaves six grandchildren ranging in age from 4 to 21.

After graduation from SDSU in 1971, where he had already worked in the school sports information office, he eventually came to the Daily Californian around 1972, David said, where he rose to sports editor.

There he met Ramon Scott, a student at Helix High School in La Mesa.

“By my sophomore year at Helix, I wanted to be a sportswriter, and Bill was one of the main reasons why,” Scott said. “I would follow him around like a little puppy” at football games, where they would share notes on stats.

“By my senior year, [Dickens] said: ‘As soon as you get done, come on over. You got a job.’” Scott told Times of San Diego.

“I didn’t go to college,” Scott said. “I thought I was going to work for a 100-year-old newspaper. I thought I was set. Nobody knew that the Internet was coming.”

But Scott began putting stories online, and when the paper folded around 2000, he was ready to save his career — and extend Dickens’.

The Daily Californian was closing, “but we had basketball games (to cover). … That night, I was able to get the stories up.”

Before he and Dickens launched East County Sports in February 2001, “my original thought was just call it BillDickens.com,” said Scott, who gave himself the title publisher and named Dickens the director. “Did it every night from then forward.”

“He was relentless as a reporter,” Scott said. “Bill would talk to you on the phone after midnight and get the real lowdown. He was a schmoozer….. He wanted to talk to those coaches and get intimate details about the team.”

He’d even talk to parents, often scooping the competition (while using only a legal pad to take notes and quotes. No tape recorder.)

“That was the kind of reporting that really wasn’t being done with high schools back then,” Scott said of his best friend. “He treated everyone like he was their friend and vice versa. He wanted to be everyone’s friend.”

Dickens, who also worked at the Union-Tribune and Grossmont College, avoided negativity in game stories.

“He had a positive stroke to his pen,” said Scott, who learned: “You’re not looking to belittle anyone who’s a student. It’s not ‘Billy Smith fumbled.’ It’s ‘Granite Hills fumbled.’ He wanted everyone to have a sense of belonging in the community — with the teams, with the sports — bringing everyone together.

“He was fair to everyone.”

He wrote pro sports as well.

“He also chronicled the careers of numerous local sports standouts, including NBA MVP Bill Walton and NFL MVP Brian Sipe from the preps to the pros,” said the profile.

Dickens covered the San Diego Chargers’ home and away games during the Air Coryell years and wrote about the Padres for 14 years, becoming a lifetime member of the Baseball Writers Association of America.

“Sometimes he would pick against one of our (East County) teams to provide that motivation,” Scott said of the print column that migrated online.

Coaches on occasion would tell Dickens to pick their team to lose, in fact, wanting to be seen as the underdog, he said. “That’s the type of relationship he had with all these coaches.”

But Dickens hungered to win at picking winners.

Baseball still was big with Dickens, though.

Scott recalled attending the July 2016 All-Star Game and associated events at Petco Park with Dickens, who displayed his knowledge of the pros.

“Bill spent every summer touring small ballparks around the country,” Scott said. “That’s how he would spend the offseason. Minor league as well.”

Scott, 48, who spent early Thursday composing a tribute column to Dickens, now looks forward to taking delivery of his “famous file cabinets, and do something to honor him.”

Son David, who by age 7 was on the sidelines with his dad, recalls traveling with him to cover Grossmont College football as far north as Sacramento.

“It was a way of life in the household,” David said.

Dickens got his son a paper route at age 10 (the Daily Californian in the afternoon and later the Union in the morning), which “taught me the value of hard work and also of trying to make everybody feel … like they’re the most important person in the world.”

Dickens’ son said David Beezer, athletic director of Christian High School in El Cajon, told him his father would make the rounds after a game, making every coach and team feel like they were his favorite.

He said his father taught him: “If you treat everybody like that, and you continue like that, you’re going to be successful.”

Ken Stone worked with Bill Dickens in sports at the Union-Tribune.