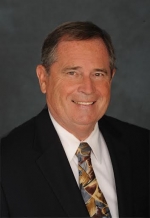 December 12, 2014 (El Cajon)--The Grossmont-Cuyamaca Community College District Governing Board has unanimously selected Bill Garrett to serve an eighth straight year as president, while Mary Kay Rosinski was picked as vice president and Greg Barr as board clerk for 2015. Garrett has served since 2008 as board president for the East County district, which enrolls about 30,0000 students at Grossmont and Cuyamaca colleges, in addition to the district’s Continuing Education and Workforce Training program.. The Governing Board meeting got under way Tuesday with Garrett giving the oath of office to trustees Barr, Debbie Justeson and Edwin Hiel, who ran unopposed in the November election.

Garrett thanked fellow trustees for their support and said the board’s cohesiveness and collegial relationships are key to its strength, as well as the support and trust it has built over the years with faculty, staff and the community at large.

“I appreciate your support to make this year as president a wonderful year,” said Garrett, a retired El Cajon city manager who joined the Governing Board in 2004. “Although we each have our individual perspectives, we come together to do what is best for the college district.” He added that much has been accomplished by the district under the leadership of Chancellor Cindy L. Miles, whom he credited for the colleges’ strong focus on student success and innovations including the East County Education Alliance, a partnership with the Grossmont Union High School District designed to provide high-schoolers with a smoother path to college. “This district would not be the district it is without the chancellor,” he said. “She has guided us so well for the past 5½ years.”

“Your dedication to public service is nothing short of remarkable,” Miles said. “The community could not ask for a better group of trustees to lead this district and to set its path into the future.”

Following the oaths of office, the Governing Board made special note of the contributions of Sunita “Sunny” Cooke, who was attending her final board meeting as Grossmont College president. Cooke will be ending her service to Grossmont College this week before beginning her new post as superintendent/president of MiraCosta College in January.

Miles noted that the number of degrees and certificates handed out at Grossmont College have doubled in the seven years that Cooke served as president. Transfer rates to four-year universities also rose by 16 percent. She also commended Cooke for showing concern for the college and students.

“Sunny has accomplished a lot during her time at Grossmont, but I think what we’ll remember most is her humanity and caring,” Miles said. “She is willing to put herself out for the good of the college and the district.”

Trustees also told Cooke how much they appreciated her contributions to the college.

“You have been fantastic,” Barr told Cooke. “You are a dynamic, smart leader who gets people feeling good about themselves.”

The Governing Board will be holding its regular meetings in 2015 on the third Tuesday of each month, with the exception of September 8 and December 8. The board meets at ­­Griffin Gate at Grossmont College in even-numbered months (February, April, June, August, October and December) and at the student center at Cuyamaca College in alternate months.