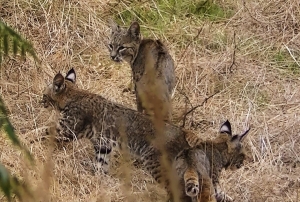 September 13, 2013 (Sacramento) – A bill to prohibit trapping of bobcats around public parks and wildlife refuges in California is now on the Governor’s desk awaiting signature.  The bill, AB 1213, would also prohibit trapping bobcats on private property without the landowner’s permission.

The bill arose after an outcry over traps set on private property around Joshua Tree National Park. But trapping is decimating  populations of bobcats in other areas, too.