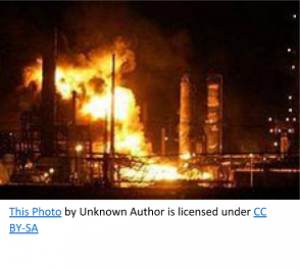 September 9, 2020 (Sacramento) – Governor Gavin Newsom has signed Senate Bill 1044 into law to protect firefighters and public water supplies from PFAS (per-and polyfluoroalkyl substances) found in firefighting foams used to combat industrial fires such as at airports, refineries and chemical plants. The cancer-causing “forever” chemicals, which never break down and are tied to many other health problems, are not used in the foams used to fight wildfires.

The bill passed the State Senate and Assembly unanimously, though East County’s legislators, Senator Brian Jones and Assemblyman Randy Voepel, did not vote.

A study of California firefighters found blood levels of PFAS three times higher than in others.

Firefighting foam with PFAS have resulted in pollution of drinking water including over 300 wells representing nearly100 public water systems serving 7.5 million Californians, the legislative analyst reported.  Separate from this bill, the state is working to develop enforceable regulatory standards for PFAS in water.

The new law, SB 1044, prohibits manufacture, sale, distribution and use of class B firefighting foam containing PFAS in California by January 1, 2022, with some exceptions, and requires sellers of protective equipment of firefighters to disclose if the gear contains PFAS.

PFAS could still be used in situations mandated by federal law and use in oil refineries and terminals can continue until 2028, though with tighter restrictions and containment requirements.

PFAS include some 5,000 man-made chemicals once used in products ranging from Teflon to Scotchguard applied to fabrics and carpets. Scientists have found PFAS in the blood of nearly everyone tested; the chemicals are so widespread that nearly every person on earth has been exposed.

Opponents claimed the ban would “limit our ability to safely fight industrial fires and protect our communities.”

But supporters note that alternative fluorine-free foams are effective, making use of PFAS unnecessary in firefighting foam. Several U.S. fire departments and major airports including Heathrow in London have already transitioned to end use of PFAS.

“Firefighters who use Class B firefighting foams that contain PFAS face an unacceptable level of additional health risks in a profession that already brings with it an elevated risk of cancer along with other job-related conditions,” the California Professional Firefighters has stated. “There is no reason to continue permitting the usage of fluorinated firefighting foams when there are non-fluorinated options available that function with the same level of efficiency.”

ECM has previously done a public records request from the County Airport Authority and found there is no record of PFAS firefighting foam being used at Gillespie Field, after hearing concerns from some area residents.