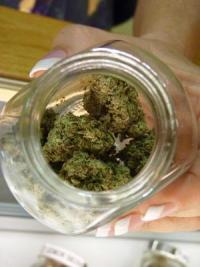 The measures cover the full gamut of the billion dollar cannabis industry, from farming to dispensaries, all to be licensed for transportation and distribution under a new Bureau of Medical Marijuana Regulation in the Department of Consumer Affairs. In addition to state licenses, local city or county licensing will also be required, so jurisdictions with bans or restrictions can keep them and voters can also weigh in on issues such as taxing the growing or sale of medical marijuana.

The new legislation, if signed, will define medical marijuana as an agricultural product subject to regulations regarding water use, pesticides and more, overseen by the Department of Food and Agriculture. Edible marijuana products will be subject to testing and labeling under jurisdiction of the Department of Public Health.

In response to law enforcement concerns, former felons would be banned from getting licenses unless they have received a rehabilitation certificate.

A provision that would have added a tax to fund environmental cleanup and public safety issues caused by the cannabis industry failed to win passage, needing a two-thirds vote, and was removed from the final version of the legislation.

The measures passed come nearly two decades after California voters legalized medical marijuana use in 1996, leading to a patchwork of local laws that have frustrated advocates of medical marijuana.

The actions come just weeks after the National Institute of Health found medical marijuana holds promise to treat cancer, a claim long made by industry advocates who also tout cannabis as a treatment for conditions ranging from glaucoma to headaches.

Medical marijuana remains illegal under federal law, though 23 states have legalized it, making the future still murky should a new administration in Washington opt to crack down on cannabis nationwide.

Next up, an initiative calling for legalization of recreational marijuana is expected to qualify for the ballot in California, after similar measures won passage in Alaska, Colorado and Oregon, though some restrictions apply. Action to pass legislation regulating medical marijuana was motivated in part by the push for full legalization of recreational pot, lawmakers have said.