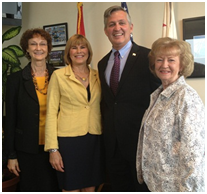 “At issue is the practice of federal agencies that place deductions upon military spouses' compensation while not placing those deductions upon that of civilian employees. That's just not fair,” said Supervisor Dave Roberts, who introduced the resolution locally along with Supervisor Bill Horn.

Currently military widows and widowers receive  monthly payment of $1,215 under the Dependency and Indemnity Compensation Plan through the Department of Veterans Affairs. Some military members have paid to buy supplemental insurance through the Survivor Benefit Plan—but their surviving spouses have been shocked to learn that the Department of Defense reduces their benefit by the VA payment amount – in some cases completely wiping out the extra compensation under the plans purchased.

“The military widow is the only category of survivor in the entire federal government that incurs this offset,” Kathy Prout told Supervisors. She added that about 35,000 surviving spouses receive no survivor benefits because of the deduction.

A UT San Diego editorial calling for the repeal of the widows’ tax indicated that 60,000 widows and widowers have their benefits cut because of the provision.