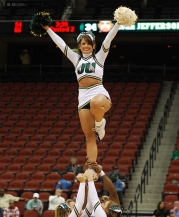 June 1, 2015 (Sacramento) – Two-thirds of all catastrophic sports injuries among female high school and college athletes nationwide occur in cheerleaders, according to a report by the National Center for Catastrophic Sports Injury Research at Chapel Hill, North Carolina.

San Diego Assemblywoman Lorena Gonzalez, a Democrat and former cheerleader, says cheerleading is “the most dangerous sport for high school athletes,” the Sacramento Bee reports. This week, Assembly Bill 949, a measure by Gonzalez aimed at improving safety for high school and collegiate cheerleaders, passed the Assembly by a 71 to 3 vote.

The bill would require the California Interscholastic Federation to regulate competitive cheerleading as a sport. Currently, cheer is not considered a sport and thus does not have the oversight or training that is provided in other student athletic fields. The measure applies only to competitive cheerleaders, not sideline cheerleaders rooting on football or other sports teams.

According to the Chapel Hill study, over the past 25 years, cheerleading accounted for 65.1 of all catastrophic sports injuries among female high school athletes and 66.7 percent among college female athletes.

During that period there were a total of 142 catastrophic injuries among all the sports played by high school and college students nationwide including injuries that were fatal, disabling or caused serious injuries such as head injuries, concussions or broken bones.  Of those 142, 67 occurred in cheerleading.

As for female college athletes, 26 of the 39 catastrophic injuries were in cheerleading, followed by field hockey with 3, lacrosse and gymnastics with 2 each.

Moreover, according to the Consumer Product Safety Commission, there were almost 37,000 emergency room visits for cheerleading injuries, an increase of almost 400% since 1980.

Frederick O. Mueller, Ph.D., director of the center and author of the report, also said catastrophic injuries to female athletes has risen in recent years—and a major factor has been the change in cheerleading activities, which now include gymnastic-type stunts, human pyramids and tossing cheerleaders into the air.

She concludes, " "If these cheerleading activities are not taught by a competent coach and keep increasing in difficulty, catastrophic injuries will continue to be a part of cheerleading."

By making cheerleading a sport, the Gonzalez bill not only provides more oversight, but also assures that participants will receive Physical Education credit, as athletes in other CIF sports already receive.

If California’s legislation can succeed in reducing the number of young women seriously injured in cheerleading competitions, that would surely be something to cheer about.