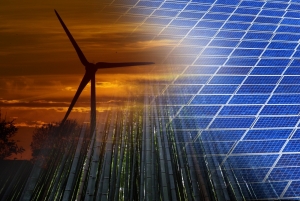 Update: This bill has been signed into law by Governor Brown.

August 29, 2018 (Sacramento) – California could become the first state in the nation to generate 100 percent of its power from renewable energy resources. A bill by State Senator Kevin del Leon would require California to reach that goal by 2045. The measure has passed both houses of the Legislature and is now awaiting Governor Jerry Brown’s signature.

In addition, the bill would require utilities statewide to get 50 percent of their power from renewable resources such as wind, solar or geothermal energy by 2026—four years earlier than the law presently requires. By 2030, the goal would be 60 percent from renewables, with 100 percent by 2045.

The measure passed with approval of most, but not all, Democrats voicing concerns over the urgent need to address climate change fueling wildfires across the west and warming temperatures worldwide.

It was opposed by Republicans and several Democrats who voiced concerns over the potential for higher utility bills for consumers and businesses.

Passage of the measure could also ramp up pressures for development of more open spaces as wind or solar farms to meet the new state mandates.

If we move towards CCA/CCEs (Community Choice Energy) these nonprofit organizations will likely result in lower bills for the consumer, as shown by exactly this at places that have instituted Community Choice Energy!
At what cost to the consumer? Sounds like a real good idea, but my educated guess is that our electric rates will rise substantially.