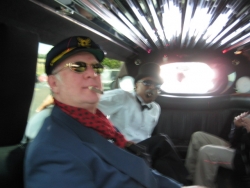 November 1, 2009 (San Diego) – Conservatives rallying for the Tea Party Express, which kicked off its national tour in San Diego, received an unexpected visit from Billionaires for Wealthcare, a group formed to draw attention to high insurance company profits in the healthcare reform debate. A video of the bizarre confrontation has been posted at YouTube.

Barbara Cummings, a Spring Valley grandmother, donned formal attire to join the satirical Billionaires group. “We arrived in a stretch limousine, complete with red carpet,” said Cummings, a retiree who has struggled with healthcare costs and supports healthcare for all.

A group of Billionaires actually made it to the stage, mistaken by Tea Party organizers, apparently, as wealthy conservative supporters.  TV crews filmed footage of the group. which bore mocking signs thanking Tea Party participants for protecting insurance company profits. Some of the participants formed a kick line on stage before they were escorted off.

“We mingled; there were surprisingly many nice folks who enjoyed our performance and were laughing along with us and taking pictures,” Cummings said of the crowd. But many others proved vitriolic, with some making violent and racist remarks, she added.

Some in the crowd appeared confused, uncertain whether the Billionaires were part of the Tea Party rally. Others expressed rage directed at the uninsured.

Chillingly, one woman shown on video screamed that if people don’t work hard enough to pay for healthcare, society should “Let them die--Let them die!”