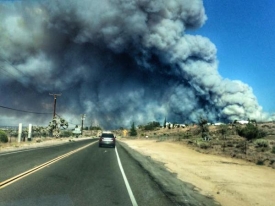 July 20, 2015 (Sacramento) -- After a series of  serious incidents involving drones interfering with firefighting aircraft,  state legislators have introduced bills that would allow firefighters and rescue personnel to damage or disable drones, also increasing penalties for drone operators who impede firefighting.

The latest and most devastating incident occurred Friday, when five drones forced firefighting planes to delay air drops in order to avoid mid-air collisions. The North Fire quickly spread out of control, crossing Interstate 15 in San Bernadino County and destroyed 20 vehicles on the freeway.  The blaze swelled to thousands of acres, also destroying homes and other property.

The operators of the drones have yet been identified. The North Fire marked the fifth time in a month that firefighting aircraft have been hampered by drones in California, Cal Fire reports.

Senate Bill 168, a bipartisan measure introduced by State Senators Ted Gaines and Mike Gatto, would give emergency responders immunity  if they damage drones during firefighting or rescue operations.

Another measure, SB 167, would raise fines and impose criminal penalties including jail time for operators of drones that impede firefighting.  It is already illegal to fly drones in an active wildfire area or near firefighting aircraft, but that has failed thus far to stop hobbyist drones from putting the lives of pilots and others in the fire zones at risk.

While some public safety advocates applaud the measure, not everyone agrees. Mark Burns’ company, Burnz Eye View in Encinitas, uses drones to film commercials and for real estate promotion. He told 10 News that some drones have lithium batteries that can explode if they are damaged, potentially causing fire and injury.

He wants to see an alert system for drone operators instead, similar to Amber Alerts, asking them to ground drones during fires.  Moreover, he concludes, “"Allowing first responders to be able to damage someone else's private property is getting into a realm of law I don't think we want to be in.”

Senator Gatto has stated that although he wants first responders to worry about safety, not liability and believes they should have the authority to destroy a drone if necessary. But Unmanned Aerial Online reports that Gatto has said he also ultimately hopes to see jamming software developed that could prevent rogue drones from flying near firefighting aircraft.