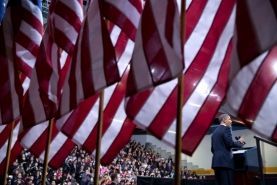 The President's plan includes a pathway to citizenship, strengthening border security, cracking down on employers who hire undocumented workers, and streamlining our legal immigration system.  For details on the President's plan, see http://www.whitehouse.gov/blog/2013/01/29/watch-live-president-obama-speaks-comprehensive-immigration-reform.  For the Senators' framework, see http://s3.documentcloud.org/documents/562528/reform0128principlessenatefinal.pdf.

“Most Americans agree that it’s time to fix a system that’s been broken for way to long,” President Obama said, speaking at a school in Las Vegas.  “I’m here because business leaders, faith leaders, labor leaders, law enforcement and leaders from both parties are coming together to say now is the time to find a better way to welcome the striving, hopeful immigrants who still see America as the land of opportunity. Now is the time to do this so we can strengthen our economy and strengthen our country’s future.”

U.S. Chamber of Commerce President Tom Donohue voiced support. “We should seize this opportunity to create an immigration system that serves the interests of our economy, our businesses and our society,” he said.

“Here in San Diego, we live every day with the need for meaningful and comprehensive reform that includes an earned path to citizenship,’ she said. “The leadership shown today by the President gives us all hope that we can finally bring the millions of undocumented immigrants out of the shadows. From there, we can better work to ensure that they are safe from exploitation with full rights, responsibilities and protections in the workplace.”

Congressman Scott Peters (D-San Diego) also lauded the bipartisan Senate proposal. “Families and businesses throughout San Diego have waited for years for real changes to our broken immigration system, and the Senate agreement announced today is a sign of true progress,” he said. “I am eager to support a plan that provides the companies in our San Diego innovation economy with the skilled workers they need to grow and thrive. I welcome a plan that allows immigrants who have lived here, worked hard, and participated in our society in a productive way to earn their legal citizenship through a fair and thorough process - especially the children who were brought here by their parents. They should not be penalized for actions that were not of their doing. Finally, any fair plan must hold employers responsible for hiring undocumented immigrants and must also ensure that they have the tools needed to verify the working status of employees."

"The President needs to let Congress—in this case, the bipartisan group of Senators taking the lead—to do its job and work out a proposal that actually stands a chance of passing both chambers," Kasper said. "He should be engaging the group directly, instead of the cameras, and avoid any perception that he’s poisoning the well."

The Republican Party, which lost the Hispanic vote overwhelmingly in November, faces a conflict in how to satisfy hard-line opponents of immigration reform versus enticing the growing number of Hispanic voters.  While some Republicans support the reforms, others have voiced concerns.

“Our immigration laws aren’t broken. They just aren’t enforced,” Rep. Lamar Smith (R-Texas) said, CNN reported.  “We’ve been down this road before with politicians promising to enforce the law in return for amnesty. And then after amnesty, they fail to make good on the enforcement promises.”

But Senator Marco Rubio (R-Florida) who helped draft the framework for legislation, said it will require undocumented immigrants to go through a background check and face prompt deportation if they have committed crimes. Others will be required to pay taxes and fines and learn English before qualifying for citizenship.