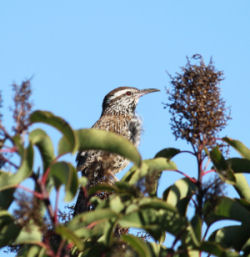 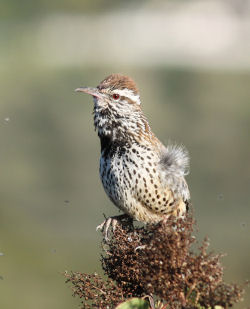 The largest North American wren, the Cactus Wren has a distinctive white stripe over each eye and a longer-than-usual tail, which it does not normally cock up. Although it can be found in urban backyards, it is a true bird of the desert and can survive without freestanding water. Almost all of its water comes from the food it eats. The Cactus Wren eats many types of food, often turning over rocks or other objects it finds on the ground in search of tasty morsels. Fruit pulp, seeds, ants, grasshoppers, beetles, and other arthropods make up its diet.

The Cactus Wren builds two nests; one for the young and one for roosting. Cactus Wrens can have as many as three broods every season. Females find a nesting place in a large cactus or thick shrub, tree or thicket. Males help build the nests. The nest is made with grass and straw and lined with feathers. The nest is large and shaped like a football. It has a side entrance that helps protect the fledglings from predators. They mate from late February to March. So this is a good time to spot the Wren here in our east county. This is the time of year I was able to photograph this Cactus Wren at Lake Jennings.

I end with a bird limerick I enjoy from the famous limerick writer Edward Lear:

“There was an Old Man with a beard

Who said, 'It is just as I feared!

Two Owls and a Hen,

Four Larks and a Wren,

Have all built their nests in my beard!’’’