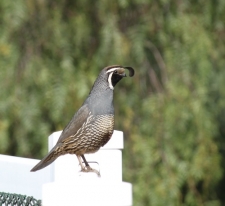 September 24, 2012 (Alpine)--The California State Bird is the California Valley Quail. Over the past two seasons, I have had the pleasure of having a covey of California Quail living in my back yard!

My last count, as of yesterday, is nine quail living in my back yard. I remember seeing the new little chicks around the end of April. The chicks are now as big as the adults are, however, you can still tell the juveniles from the adults by the size of the plumes on the top of their heads as well as the markings and feathers that are not as deep and striking as the adults’ markings.

The quail is a very social bird that travels in groups call coveys. They are social in their own group but very skittish when they see anything that might be perceived as a danger. I can never get very close to them because they flee as soon as they know I am around. Although this year they are a bit more used to seeing me and are not  as urgent to make a break for it.

I think they feel safe in my yard because I have a chain link fence around the perimeter of the yard. Coyotes cannot get in the yard, although I have seen them many times come right up to the fence. Actually, I have had coyotes come to my front door and eat out of the cat dishes. We feed the cats indoors now! Therefore, the Quail have a safe corner of the yard under a large Laurel Sumac in which they live and seem to be a happy lot. 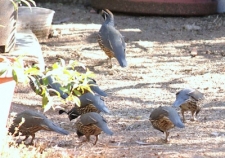 The California Quail became our state bird in 1931. They can be seen year round in the East County at the edges of urban areas and are very plentiful in the fields, foothills and lakes around our east county. They forage on the ground, often scratching at the soil. Their diets consist mainly of seeds and leaves, but also eat some berries and insects. Quail digests vegetation with the help of protozoans in their intestine. Chicks acquire the protozoans by pecking at the feces of adults. They are very adapted to drought conditions and can get by with little or sometimes no water, getting their moisture from insects and succulent vegetation.

Quail are not the best airborne flyers but can run and flee on foot very efficiently. The Quails head plume or topknot, looks like a single feather, but it is actually a cluster of six overlapping feathers. I believe it is assumed that the Quail is a drab and colorless looking bird. I disagree; I think the patterns and markings are very striking. I am always surprised at beautiful the markings are on this bird.

All these photos were taken in the in the laid-back community of Alpine.