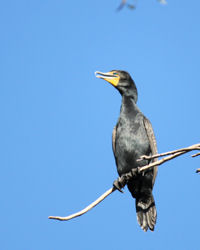 By Greg Dunne
April 27, 2012 (Lake Jennings) –The Cormorant is a silly bird. That’s what I named my favorite photograph of the Cormorant, which I  entered in the Lake Jennings photo contest.  My photo received an honorable mention and will receive a ribbon, which I will proudly display on my desk. Before I provide more information on Cormorants—including why they are silly birds-- I would like to mention a few words about the rangers and staff at Lake Jennings.

The Lake Jennings rangers and staff are probably the most helpful and friendly people you will run into at a park. They are very engaging folks, always eager to answer questions about fishing, walking, birding, and plants. My sincere thanks to the staff at Lake Jennings for always making my stops enjoyable. The walk around the lake is about 5 miles and is very pleasing.  My visits there are not as frequent as I would like because they are only open to the public three days a week. The lake is open to the general public for fishing (or bird watching and walking) three days a week on Fridays, Saturdays, and Sundays. The campground is open seven days a week and fishing is available to registered campers. 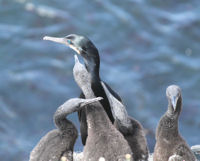 We have three species of Cormorants in San Diego. The Brandt’s Cormorant, Pelagic Cormorant and the Double-Crested Cormorant.  The Brandt’s and Pelagic Cormorants are strictly maritime birds and can often be seen at the cliff ledges of La Jolla. The Cormorant that we see in relatively large numbers at our lakes in the East County is the Double-Crested Cormorant. The Double Crested Cormorant is more abundant in the fall and winter than in spring and summer.
When in the water, often with just its neck and head visible, it’s a great swimmer that swims low in the water and dives from the surface. It uses its feet for propulsion and is able to dive to a depth of over 24 feet and stay submerged for 30-70 seconds. I have watched them dive many times and I am always surprised how far they swim and how long they stay under the water. Reference books give the stats of depth and time submerged that I just mentioned, but I think it (or it seems) to be a bit longer. I have even lost track of Cormorants swimming underwater – waiting for them to come back up and not being able to find where they surfaced again!
After diving, it spends long periods standing with its wings outstretched to allow them to dry, since they are not fully waterproofed. One of my favorite characteristics of the Cormorant is that it often flies low over the water, maybe only a couple of feet above the surface and in long single-file lines.

The Double-Crested Cormorant makes a bulky nest of sticks and other materials. It frequently picks up junk, such as rope, deflated balloons, fishnet, and plastic debris to incorporate into the nest. Parts of dead birds are commonly used too. Double-crested Cormorant nests often are exposed to direct sun. Adults shade the chicks and also bring them water, pouring it from their mouths into those of the chicks.
And remember when I called the Cormorant a “silly bird”? Well, it’s found that large pebbles occasionally turn up in cormorant nests, and the cormorants treat them as eggs.  What a wonderful silly bird!