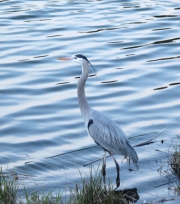 August 8, 2014 (Lake Murray) --Always dazzling when you see them with their long S-shaped necks, usually standing motionless, they look as if they are in stealth mode. The Great Blue Heron is one of our largest, most majestic birds in the East County.

Tall and thin with a large wingspan, this bird can stand 4 feet 6 inches tall with a wingspan of 6 feet 7 inches. The Blue Heron walks in a distinct straight line with their long-legged stride. 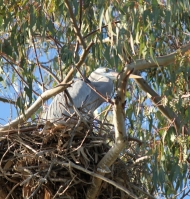 Blue Herons can be aggressive when feeding or defending it’s nesting area. They will defend their territories from other Herons with dramatic displays in which they approach intruders with their head thrown back, wings outstretched, and bill pointing skyward. This demonstrates “I am large, dangerous, and I’ll use this weapon of a bill to defend my area.”  Gulls and even humans can be a target of this defensive maneuver.

Great Blue Herons are found in our marshlands and lakes around the county.  I never get tired of seeing these magnificent birds on my walks around Lake Murray or Santee Lakes. Blue Herons are always an easy subject to photograph. I have taken hundreds of photos of Blue Herons over the years.  They don’t scare easily and are motionless most of the time. They provide a photo opportunity that is not easy to pass up. 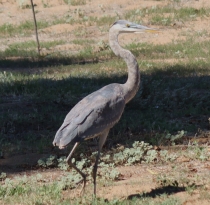 Feeding on mostly aquatic animals, fish and frogs, the Heron also feeds on snakes, small rodents, almost anything that comes within striking distance. They grab smaller prey with their strong mandibles (upper and lower parts of the bill) or can use their dagger-like bills to impale larger fish and then swallow whole after shaking and beating the prey. Trying to eat almost anything that comes in view, they have been known to chock to death on prey that is too large. Some of my birding friends have seen Blue Herons chase squirrels back down their holes!

Mostly building nests high in trees, the male Great Blue Herons collect much of the nest material, gathering sticks from the ground and nearby shrubs and trees, and from unguarded and abandoned nests, presenting them to the female. She weaves a platform and a saucer-shaped nest cup, lining it with pine needles, moss, reeds, dry grass, mangrove leaves, or small twigs.

Nest building can take from 3 days up to 2 weeks; the finished nest can range from a simple platform measuring 20 inches across to more elaborate structures used over multiple years, reaching 4 feet across and nearly 3.5 feet deep. Some of my favorite Heron nests were at Lindo Lake high in the eucalyptus trees. Unfortunately, on my last visit to Lindo Lake most of the trees had been trimmed thus leaving the Herons and Egrets to build new nests.

All of these photos were taken at Lake Murray. I particuly like the one of the Heron in the nest high in the Eucalyptus tree. This (nest shot) is right under some picnic tables in the main parking lot. Nobody chances to look straight up, see the large nests with very large Herons in them, until I show up and start taking photos of them! Be observant in nature and it will pay off if you are patient.