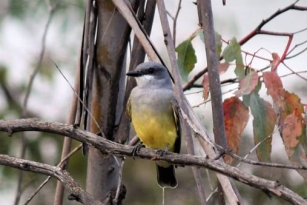 May 22, 2017 (San Diego’s East County) -- The other day, my friend Glenn Kessell asked me what bird he often hears making very piercing calls in the morning before any of the other birds have started singing. I told him it was most likely the Western Kingbird. The Kingbird has a very loud, high pitched call – best described as Chi-BEER! 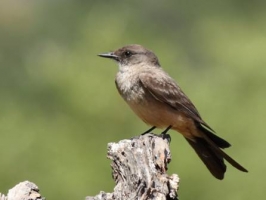 The Kingbird is a solitary bird and can usually be spotted perching on telephone wires or high atop a tree in plain sight so that it has an extensive view of its surroundings.  This bird can defend like no other and is aptly named for its fierce defending from any predators around its area and nesting site. Both the male and female Kingbird can be very aggressive and is not afraid to defend the territory around the nest from predators which include everything from snakes and rats to hawks, ravens, and crows. But this bird can defend like no other. 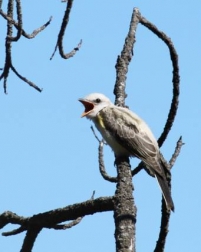 On occasion, I have seen a Kingbird chase off a much larger predator such as a Red-tail Hawk and it is an impressive show. The last time I saw a Kingbird chase off a Hawk was a just few weeks ago – the Kingbird was right on top of the hawk which was flying away, I mean right on top of the hawk. Both birds were in flight and the Kingbird was only inches away directly over the hawk, squawking and taking jabs at the hawk from above. The hawk, being at least four times the size of the Kingbird in size, wanted nothing to do with this crazy bird and was trying to get out of the area as fast as it could.

A member of the flycatcher family, the Kingbird is an acrobatic flyer. Kingbirds have keen eyesight and catch flying insects mid-flight. They can catch two or more insects in flight before returning to a perch. Food includes anything from bees and wasps, to grasshoppers and moths. Although the Kingbird will occasionally look for insects on the ground and will eat berries or small fruits, it prefers to hunt for flying insects where it feels particularly comfortable as an ace flyer. 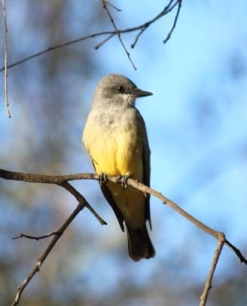 Our area has three species of Kingbirds: the Western, the Cassin’s and the Thick-Billed Kingbird. The two species we see most commonly are the Western and the Cassin’s. The Thick-Billed Kingbird is more common in Arizona or New Mexico and is rarely seen in San Diego. The Western and Cassin’s Kingbird are very difficult to tell apart. Both are similar in looks and behavior. The best way I tell them apart is that the Western usually seems to have a bit more yellow on its belly feathers and Cassin’s have a bit darker grey head.

Keep an eye and an ear open for the Kingbird, they are a popular bird in the East County. And, if you see a much smaller bird chasing off a hawk, it’s most likely a Kingbird. My photo of a new fledgling Kingbird (with mouth open and white head) was taken at Lindo Lake in the East County.  It is probably only one or two days out of the nest for the first time. Long live the Kingbird.