December 17, 2013 (San Diego’s East County) – Our County has many migratory birds.  This week, I’m highlighting two of them: the Northern Shoveler Duck (although a few will stay year round) and a small song bird, the Townsend’s Warbler, a winter visitor.

The Northern Shoveler is primarily a winter visitor to the County, abundant this time of year at Santee Lakes, Lindo Lake and I’ve even spotted a few this year at Lake Murray. The Northern Shoveler is a medium sized duck with a very long bill that is wider at the tip than the base. It has a glossy dark green head similar to the Mallard Duck but the bill of the shoveler stands out from any other duck.  Shovelers use this bill to filter out food from the water. 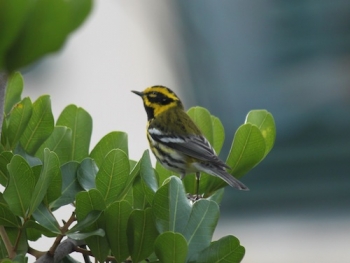 The Shoveler’s summer breeding locations are from Alaska through Canada and Northern parts of the U.S. It winters in the southern states of the U.S. and in most of Mexico. Its range extends to Europe and Russia as well. The populations of the Northern Shoveler are steady and strong at 5 to 6.4 million worldwide. I am happy to see the Shoveler doing well, as it is always a joy to see this duck on the lake. Take a walk at one of the lakes here in the East County and enjoy this colorful duck. They should be here for another month or so. 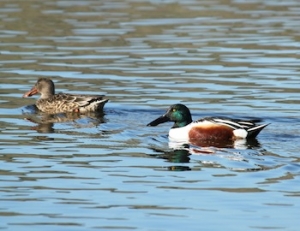 The Townsend’s Warbler is not an easy bird to observe; they like to forage and nest high in the tops of trees. When you take your camera out photographing nature, do not get discouraged with photos that not always perfect as it is the joy of being able to identify your subjects when you get back home that I take pleasure in. My photos of the Townsend’s are not the best, but I have only seen this species a couple of times so I was happy with any kind of a shot. Sometimes that is the best we amateur photographers can do.

Migratory birds come in all shapes and sizes. Prime migratory times here are from October through December and vary from large geese to small songbirds. The longest migration goes to the Arctic Tern (not seen in our area) as it sees two summers each year traveling an astonishingly 44,000 miles each year along its winding route to the oceans around Antarctic and back! The Arctic Tern will travel approximately 1.5 million miles in its lifetime. Some migrations are only a few miles or even less but are done each year. Two examples of short trips are the Mountain Quail and the Blue Grouse.  They migrate from the top of the mountains to the bottom of the same mountain. 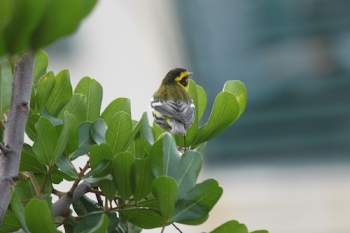 Bird Migration is the regular seasonal movement, often north and south along a flyway between breeding and wintering grounds, undertaken by many species of birds. Migration, which carries high costs in predation and mortality, including from hunting by humans, is driven primarily by availability of food, weather and breeding.

Historically, migration has been recorded as much as 3,000 years ago by Ancient Greek authors including Homer and Aristotle, and in the Book of Job, for species such as Storks, Turtle Doves and Swallows. More recently, Johannes Leche began recording dates of arrivals of spring migrants in Finland in 1749, and scientific studies today have used techniques including bird ringing (banding) and satellite tracking. 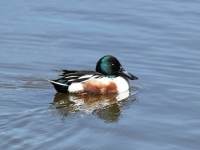 Threats to migratory birds have grown with habitat destruction especially of stopover and wintering sites, as well as structures such as power lines and wind farms.

I leave with this fun collective noun. A group of Warblers is called a “Bouquet of Warblers.”