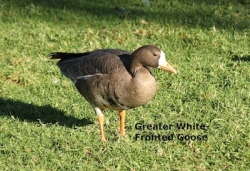 November 15, 2012 (San Diego’s East County)--We have our share of rare bird sightings now and then in our East County. The three I am going to talk about are the Greater White-Fronted Goose, the Nutmeg Mannikin, and the Vermilion Flycatcher. The Vermilion Flycatcher and the Nutmeg Mannikin are going to be the hardest to spot by the novice birder, but with any experience watching birds you should be able to see these uncommon visitors.  The Greater White-Footed Goose on the other hand can easily be seen any time of day at Lindo Lake.

But first, the Vermilion!  I was unaware of this bird in San Diego County until a birding acquaintance gave me the tip. While walking at Lindo Lake in Lakeside I came across my friend who informed me about the Vermilion Flycatcher and where he hangs out.  Fascinated at the possibility of seeing one (I never had seen one before) I looked and looked and had no luck.  The next day I went back to look again and there he was!  I was very excited with my sighting and when I got home I did some research on him. 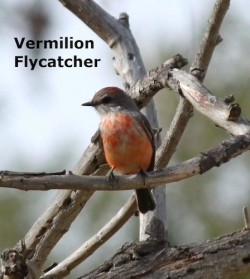 Most Flycatchers are rather drab, but the Vermilion Flycatcher is a striking exception.  He is bright red and perches conspicuously, making periodic flights to nab insect prey.  They generally prefer somewhat open areas and are found in trees or shrubs in savannah, scrub, agricultural areas, riparian woodlands, and desert as well, but usually near water.

The Vermillion Flycatcher is a very rare visitor to the San Diego area and even more so since the mid 1980’s.  According to the San Diego County Bird Atlas, results of Christmas bird counts from 1960 through 1974, the Vermilion Flycatcher was annual on the San Diego count, with a maximum of only eight in 1968.  From 1975 through 1986, it occurred in only five of the 12 years, with no more than one individual bird sighted. Since 1986, the species has gone unrecorded. A rare sighting indeed! I spotted him last Wednesday, 10/24/12, on the very east end of Lindo Lake.

The Nutmeg Mannikin, also known as the “Spice Finch”, is a new visitor to our East County.   I have been observing them for about 3 years and I believe they are becoming more established and might soon become a regular resident.  Lake Murray seems to be their choice of location.

The Nutmeg Mannikin is a native of Asia and was introduced into the United States and first established in Hawaii.  It is a sparrow-sized bird with a stubby dark bill, brown upperparts and a dark brown head. The underparts are very eye catching, white with black scale markings. It is a very social bird and travels in large groups.  One of my favorite birds, and I believe I am one of the first birders to observe the Nutmeg Mannikin in San Diego County. 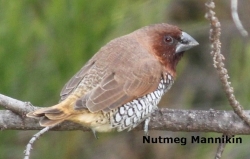 Last but not least of our rare visitors to the East County is the Greater White-Fronted Goose.  This friendly Goose can easily be seen anytime of day at Lindo Lake.  He enjoys hanging out with the other geese (Snow Geese and Canadian Geese) and is easy to identify because he is the smallest of the geese at the lake. He is Gray-Brown in color and has a variable amount of black matting on the belly.  The bill is pinkish to orange and the forehead just above the bill is white.   As with many geese, the Greater White-Fronted Goose pairs stay together for years and migrate together (although this goose seems to prefer to be alone among his own kind) along with their offspring.  White-Fronted family bonds can last longer than in most geese and some young stay with their parents through the next breeding season. Parent and sibling associations may continue throughout their lives.

It is exciting we live in a rich, warm climate that can attract uncommon wild life to our East County.