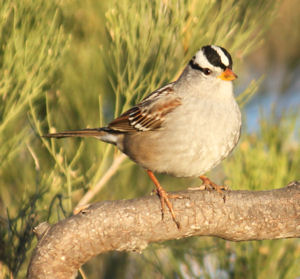 By Greg Dunne
January 4, 2012 (Lake Murray) -- The Sparrow is not exactly an exotic or glamorous bird, but it’s one with which we are all familiar.  This column highlights just a couple of the many sparrows in our area. Have some fun and try to guess how many different varieties of sparrows have passed through or are residents of our fine county that the San Diego Natural History Museum list on their website.  Answer at the end of article, and I’ll give you a hint, it’s over 10.
So, the White-Crowned Sparrow and the Lark Sparrow are the bird talk today. The White-Crowned Sparrow is one of the most abundant birds in our East County. If you’ve walked around your neighborhood, or been to the park, lake, or just about anywhere outside you may not have realized it, but you’ve probably seen a White-Crowned Sparrow.
Pictured here at Lake Murray is the White-Crowned Sparrow, easily identified by the white stripes on his head, yellowish bill, and clean gray throat. It is often seen foraging on the ground for seeds and insects. A young male White-Crowned Sparrow learns the basics of the song it will sing as an adult during the first two or three months of its life. It does not learn directly from its father, but rather from the generalized song environment of its birth neighborhood.Because male White-Crowned Sparrows learn the songs they grew up with and do not travel far from where they were raised, song dialects frequently form.  Males on the edge of two dialects may be bilingual and able to sing both dialects.
The White-Crowned Sparrow is native to North America, unlike the House Sparrow which was introduced into Brooklyn, New York, in 1851. By 1900 the House Sparrow had spread to the Rocky Mountains.
House Sparrows aren’t related to other North American sparrows, and they are differently shaped. House Sparrows are chunkier, fuller in the chest, with a larger, rounded head, shorter tail, and stouter bill than most American sparrows. Males have a black bill, mask, throat, and breast. 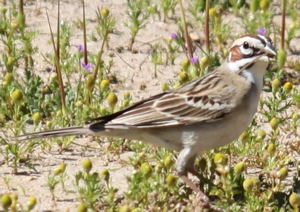 My favorite sparrow is the Lark Sparrow, pictured here in Mission George Regional Park. A large sparrow with a striking face pattern, the cheeks and crown sides are chestnut, with white eyebrow and crown stripes.
Unlike many songbirds, the Lark Sparrow walks on the ground rather than hops. It hops only during courtship. I have seen the courtship of my favorite sparrow, but it was many years ago and I’d like to observe it again someday, (there is always something to be on the lookout for when you’re a birder) but it’s pretty neat for a“non glamorous” bird.
A courting male Lark Sparrow crouches on the ground, holds his tail up at a 45 degree angle from the ground, spreads the tail feathers to show off the white tips, and then struts with its wings drooping so that the wingtips nearly touch the ground. When the female is receptive, the male gives her a small twig just before copulation.

Now the answer to the question of how many sparrows are on the website of The San Diego Natural History Museum. It may surprise you that 50 different varieties of sparrows are listed; and if you include all of the varieties of Towhee, Junco, Longspur and Little Bunting, all from the same family (Emberizidae), the list grows to 66! Be sure to keep an ear open for the Song Sparrow, seemingly always singing with his head raised high in the air.