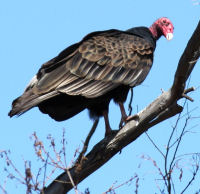 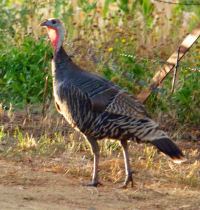 November 16, 2011 (Harbison Canyon) -- It’s November, the month when we all enjoy turkey at Thanksgiving. So this edition of Bird Talk is on the wild turkey and the other turkey namesake bird, the turkey vulture.

The wild turkey is not native to California, although it is native to North America. Numerous attempts tointroduce the turkey to California failed. Then in the early 1990s a second attempt was successful.  Today, wild turkeys can be seen throughout the back hills of East San Diego County.

I remember seeing my first wild turkey in Harbison Canyon. I was driving along Dehesa Road close to where Dehesa Road and Harbison Canyon Road meet. A man was pulled off to the side of the road, intently looking through binoculars. Well, this got my curiosity and I turned around and pulled up to see what he was looking at. I could see right away there were five wild turkeys! I had my binoculars in my car. So, we both could watch them for at least 4 to 5 minutes until they slipped into the brush.
I didn’t have my camera with me and don’t have my own photos of wild turkeys (photos of turkey vultures are mine, and the turkey photos were taken by ECM editor Miriam Raftery (not stock photos), but sure enjoyed watching those turkeys that day. 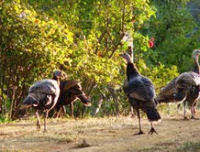 The turkey vulture may not have the best reputation, but this is a remarkable bird. It has keen eyesight, and a keen sense of smell. Very graceful in flight, this bird stands out when soaring overhead. It received its common name from the resemblance of the adult’s bald red head and dark plumage to that of the male wild turkey.
The turkey vulture has one of the best immune systems in the animal kingdom, happily feeding on carcasses without contracting botulism, anthrax, cholera, or salmonella. That’s a healthy bird!
One more fun note for the “10 year old boy in us”. The turkey vulture often defecates on its own legs, using the evaporation of the water in the feces and or urine to cool itself, a process known as urohidrosis. It cools the blood vessels in the unfeathered legs and feet of the Vulture.
On that note, Happy Thanksgiving.
Greg Dunne is an avid birder, naturalist, and native of East County.

Fossils have been found in the La Brea Tar Pits and a possible turkey fossil was recently found in Orange County. So....it's possible they really were hear, eons ago!

Interesting piece. Thanks, Greg. If only our politicians could emulate the Turkey Vulture and soil only themselves.