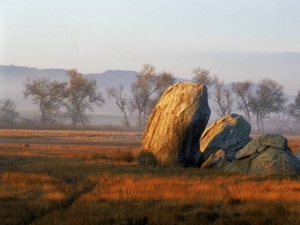 March 15, 2015 (Ramona) - Should Ramona’s Grasslands Preserve be opened up for more public access?

Congressman Duncan Hunter’s aide, Michael Harrison, said that more access should be a “very high priority” during a meeting of the Ramona Trails Association March 3rd, the Ramona Sentinel reports.

Hunter’s office has been trying to persuade the U.S. Fish and Wildlife Agency to open up access in the Old Survey 97 area, a trail that could connect the Ramona Grasslands Preserve to the San Pasqual Valley and ultimately, the Coast to Crest Trail. The trail is currently closed to the public, except for docent-led programs.

But the federal wildlife agency has voiced concerns over impacts on nesting golden eagles. The site is also home to bald eagles and endangered Stephens’ kangaroo rats.

The County has done studies to monitor eagles in the area that it operates, hoping to persuade the U.S. Fish & Wildlife Service that more people  using trails would not disturb eagles.

San Diego County had also planned to build additional new trails just north of the Ramona airport. But those plans recently ran aground, halted after burrows occupied by an endangered kangaroo rat were discovered at the site.