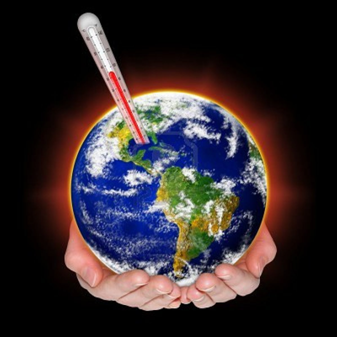 Roger Coppock, AKA Mr. Climate T-shirt, a climate change writer for East County Magazine, below the tells the story of his transformation into a global warming activist.

March 13, 2017 (San Diego’s East County) -- Mr. Climate T-shirt, the greenhouse gas activist, was born more than a decade ago, when his son, Will Rogers Coppock, came to him with some data he had graphed for his entry into the San Diego Science and Engineering Fair.  "My graph has the jiggles," he complained.

Yes, Will's graph of historical global mean near surface temperatures had points spread far from any central tendency, making it hard for the budding scientist to find any conclusion.  (This was more than a decade ago, when global warming trends were not as obvious as they are today.)  Daddy had to help his son out.

"Use a rate transform, Will," I suggested.  "Compute the differences in the data.  Don't look at the data's values, but the rate of change in the data."

Will, a sixth grader, hadn't learned the computer programming skills to do this quickly yet, so about a hour later he came back only half-satisfied with another graph on quad-ruled paper.  My son isn't the brightest, but he is one of the most persistent people I know.

"Yes, dad.  This graph is smoother, but it still has the jiggles," he said.

"Well, if you like your graph of first differences, which show the speed of global warming, then let's compute second differences, or the acceleration, of the warming," I said.

It being near my son's bedtime, I wrote the few lines of Microsoft BASIC for Mac to compute differences, take their mean, and showed a graph like this to him. 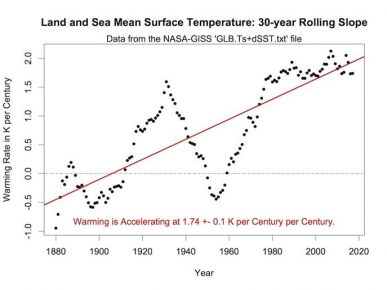 "So, my paper will just say that global warming is accelerating, Daddy?" my son said as he went to bed.

I never answered my son's question.  I just sat staring in front of the black and white screen of our Mac Plus.  I don't know how long I stared.  Possibly, it was over an hour.

I'm the result of a long line of puzzle junkies.  I met my wife of 37 years at a MENSA singles party.  Even today, after both near oxygen death and brain surgery, I still can read the messages of data sets.  I was sitting mesmerized in front of the graph not because I didn't understand it, but because I now knew damn well what Dr. James Hansen's "GISTEMP" data said.

An anger welled up from deep within me.  I wanted to stand up and scream, "NOT WITH MY PLANET YOU DON'T!"

My son put an overly complex title on his paper, "The Spatial and Temporal Distribution of 'Global Warming':

Three Mysteries."  In spite of this, the paper won a prize.  (Likely because at least one of the judges had actually taken the time to read the paper.)

I continued on with my studies of the issue, using the research skills I learned on my computer science graduate school projects.  Eventually, I drifted into a few SD 350 meetings, but was never accepted as part of that organization.  I issue monthly graphs of global temperatures and satellite infrared and microwave data, give occasional presentations, and write articles for the East County Magazine.

Besides global warming, my son also connected me with Pure Land Buddhism.  Buddhist teachings helped me control my anger and learn to accept that the greenhouse death of human civilization is inevitable.  (Please see: http://eastcountymagazine.org/global-warming-has-anyone-really-done-anything.  Also see:

Thank you, I look forward to your suggestions an am particularly interested in how I might get involved in some meaningful way