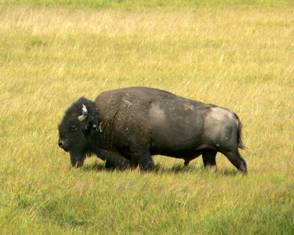 April 27, 2016 (San Diego's East County) - It’s rare for Congress to agree on anything these days. But this week, in a rare show of bipartisanship, Congress voted to officially designated the bison as America’s official national mammal.

Once, millions of bison, also known as buffalo, roamed the American plains until hunters drove the vast herds to near extinction. The bison were hunted for sport, for meat, and to eradicate competitors of cattle and sheep grazing across the West. The Army also ordered buffalos killed in the 1800s in an effort to eradicate Plains Indians,  who relied on bison for survival, a shameful blight in America's history.

Even where protected, the bison have sometimes fallen victim to diseases or wandered outside national parks, where they have been shot and killed.

Now that Congress had made its declaration honoring the noble bison as the national symbol of the United States, the National Wildlife Federation is seeking to take the next step. It’s inviting the public to “adopt an acre” ($30 for 10 acres) with donations to create a safe habitat for wild bison to once again roam free in the American west.