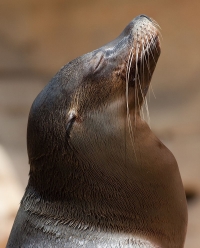 April 5, 2015 (San Diego) – At East County Magazine, our focus is normally on the inland region.  But this week, there are just too many bizarre beach stories to resist.

The first sounds like a whopper of a fish story. A man posing for a photo and holding a fish aboard a boat on Mission Bay Sunday was pulled overboard by an apparently hungry sea lion—or perhaps it just wanted a selfie shot.  The 300-pound marine mammal bit the man several times and dragged him underwater, multiple news stations reported. The startled fisherman was treated for puncture wounds and lacerations to his leg. There is no word on the fate of the fish.

Water temperatures several degrees above normal drew crowds to the beach over Easter Weekend, but at Mission Beach, lifeguards had to rescue over two dozen swimmers due to strong rip currents, 10 News reports. One teen admitted this was her fifth time having to be rescued.  So here’s a tip – unless you’re angling for a hunky lifeguard to haul you out of the water, stay out of the ocean when the rip current flags are up, and if you do get caught in a rip tide, swim parallel to the shoreline to escape it.

Here’s some news that may have scuba fans diving for their wallets.  On Friday, the creators of “Shark Shield” visited San Diego to tout their new product – an electronic 3-D shield that surrounds the diver and reportedly repels shark attacks, CBS reports. You can learn more at www.SharkShield.com including videos, test results and a testimonial from a woman who says the device saved her from a great white shark. So if you’ve been avoiding scuba diving for fear of Jaws, it may finally be safe to go back in the water.