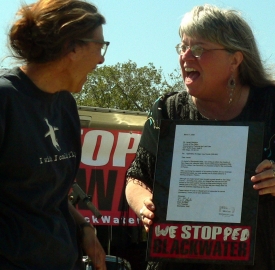 April 15, 2015 (San Diego’s East County) – Many in East County recall the successful battle wagered by rural residents here to halt a Blackwater paramilitary training camp from being built in Potrero.   Just months before Blackwater announced plans to cancel the Potrero project in 2008, news broke that Blackwater guards had been accused of massacring innocent civilians in Iraq’s Nisour Square on September 16, 2007. 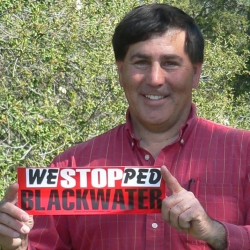 On Monday, a federal judge sentenced four Blackwater guards convicted of those crimes to long prison terms.  Nicholas Slatten, 31, was convicted of murder and sentenced to life in prison for firing the first shots.  Paul Slough, Evan Liberty and Dustin Heard, all in their 30s, were sentenced to 30 years on multiple counts of manslaughter and attempted manslaughter. The guards were found guilty of killing 14 of the 17 Iraqis who died after the guards opened fire.

A fifth guard testified against his former colleagues and has not yet been sentenced.

Blackwater had over $1 billion in government contracts ranging from protecting diplomats overseas to clandestine counterterrorism operations. The company founded by Erik Prince, which has since changed names multiple times, has also been involved in training law enforcement officers for multiple agencies across the nation.

The shootings occurred after a car bomb detonated in central Baghdad near where Blackwater’s security team was escorting a U.S. official.  The convoy drove to a secured area but then, disobeying an order from Blackwater’s command, the team’s leader directed his team to leave the Green Zone and set up a blockade in Nisour Square, a busy traffic circle, where the shootings took place.

The defense claimed the Blackwater guards, serving as private contractors for the U.S. government, were shot at by Iraqi insurgents and fired in self defense.

But dozens of Iraqi citizens and several former Blackwater employees testified that the shootings were unprovoked.  A Federal Bureau of Investigation (FBI) investigation of the killings found at least 14 were unjustified.

The victims included a mother who pushed her daughter to safety and was then shot and killed herself. Another man was peppered with a hail of bullets while he lay dying, unarmed, on the street.  A third was shot with his hands up, the New York Times reports.

Federal prosecutor T. Patrick Martin called the shootings “nothing short of an atrocity.”

Jeremy Scahill, author of the book Blackwater: The Rise of the World’s Most Powerful Mercenary Army, reacted to the news with this statement, Democracy Now reports. “People who gun down innocent Iraqis…must answer for their crimes. So too should those who sent them there to kill at will.”  Scahill visited East County during the Potrero controversy to speak about Blackwater issues and meet with local residents to hear their concerns.

Those convicted defiantly asserted their innocence. Slough told the court, “I know for a fact that I will be exonerated, in this life and the next.”

Heard stated, “I am very sorry for the loss of life. But I cannot say in all honesty to the court that I believe I did anything wrong,” according to the New York Times.

UT San Diego suggests those convicted could yet have hope to win freedom through a presidential pardon, noting that George W. Bush commuted the sentences of two Border Patrol officers convicted in a shooting, who served just two years.

The incident led to a temporary suspension of Blackwater’s rights to work in Iraq and led Iraq’s government to call for compensation for victims and their families.  Iraqi officials ordered Blackwater to leave Iraq and in 2009, the U.S. announced it would not renew its security contract with the company.

Congress held hearings on damage done to U.S. security interests.  Congressman Henry Wax stated that the Blackwater controversy demonstrated the “perils of excessive reliance on private security contractors.”  An investigation by a House oversight committee found this was far from the only case of violence involving Blackwater and that in 80% of cases, Blackwater fired first.

In 2007, the United Nations released a report finding use of Blackwater and other private contractors amounted to having them perform military duties as a “new form of mercenary activity” and that this was illegal under international war—but the U.S. never signed the 1989 UN Mercenary Convention banning mercenaries’ use, nor did U.S. sign a protocol added to the Geneva convention banning mercenaries from participating in hostilities for private gain.

In Monday’s sentencing Blackwater’s four guards convicted in the Nisour Square killings, U.S. District Court Judge Royce C. Lamberth called the massacre a wild and unprovoked act that could not be condoned.

In East County, the news has validated concerns raised by Potrero residents over Blackwater’s track record of violence and confirmed views of those who  voiced relief that Blackwater did not become their new neighbor.