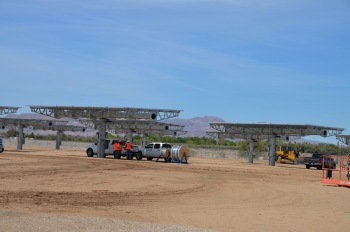 Despite company’s woes, county releases EIR on Soitec’s proposed Boulevard projects. A hearing is set for January 16, with the deadline for public comment  January 14.

The free-fall occurred after the company announced that the main project in its solar division has been cancelled and that the company will be scaling down its San Diego facility.  Tenaska Solar Ventures cancelled its deal to use Soitec’s concentrated photovoltaic panels at a facility in Imperial County. In addition, San Diego Gas & Electric spokeswoman Jennifer Ramp says that the utility “does not have any contracts with Soitec.” That statement conflicts with claims previously made by Soitec, Voice of San Diego reports in an article titled “The Darling of San Diego Solar Manufacturing Is on Its Death Bed.”

Despite this precipitous news, ironically the County of San Diego released the final environmental impact report (EIR) on Soitec’s four proposed industrial-scale solar projects in Boulevard.  A hearing on the projects are set for January 16th, which public comments due by January 14th at 4 p.m. , according to Mindy Fogg, planning manager for the County.

Howard Cook, chair of the Jacumba Sponsor Group, has raised serious questions over groundwater usage by the proposed solar projects, as well as other environmental concerns. Now, in light of Soitec’s financial instability, he asks, “Why is the County going ahead with an EIR on these projects?”

Kelly Fuller, executive director of Protect Our Communities, a citizens’ watchdog group that has opposed the projects on environmental grounds, also questions if the County will go forward with its hearing given the company’s serious problems.  She notes that several other conservation groups criticized the Boulevard projects’ draft EIR. “So did the U.S. Fish and Wildlife Service, and to a somewhat lesser extent, the California Department of Fish and Game,” she states in an e-mail to East County Magazine.

Soitec promised to create 450 local jobs and produce 305 megawatts of solar panels from local projects alone, tied to SDG&E, when Soitec received a $25 million grant from the  U.S. Department of Energy for  expedited construction of its San Diego facility.  But to date, the company has produced only about 5 megawatts—a small fraction of the power promised.

The company has been touted as a world leader in concentrated photovoltaic or CPV panels, which are more efficient than traditional solar panels, but require ore sunlight and are costlier.

Soitec isn’t the only concentrated photovoltaic maker in trouble.  Stirling Energy Systems, an Arizona-based company, filed for bankruptcy in 2011. In the same year, Solar Millenium of Germany filed for insolvency and last year, Amonix shut down its Nevada manufacturing plant.

Soitec built just one project locally, in Borrego Springs, and recently sold that project to Invenergy Solar Devleopment.  In October, Soitec reportedly announced that an unnamed company had bought out Soitec’s four remaining agreements with SDG&E—agreements that SDG&E now says don’t exist, if they ever did.

Reuters reports that an analyst Bryan Garnier projects that Soitec is expected to generate negative results for at least the next three years. While the company has indicated it aims to “explore new opportunities” with local partners in hopes of expanding its U.S. projects, some local residents have voiced concerns that the company could seek to push through approvals on its Boulevard projects and then sell them to a non-local company.

The stakes are high.  Waters from the Boulevard area feed the Anza-Borrego Desert State Park, as well as providing water for residents and livestock in the Boulevard area.  As East County Magazine previously reported, a hydrology expert at San Diego State concluded that the Boulevard projects proposed by Soitec would use so much groundwater for construction locally that they could deplete aquifers to below the levels that could be recharged with rainwater—leading to potential collapse of the region’s entire ecosystem.

Invest our taxpayer $$$ towards renewable energy systems that actually produce the amount of energy they claim they will. It doesn't make sense to diversify when the costs exceed the output. $25 million dollars is a lot of money and could go a long way towards a proven, more efficient, environmentally-sensitive renewable energy source like rooftop solar. Companies shouldn't be able to proceed with their projects when their future is uncertain just to try and recoup their losses. We just risk throwing our money to another company that could be just as bad or worse.
Given our state's destructive renewable energy mandates, something tells me the Soitec void will soon be filled by another corporate opportunist.