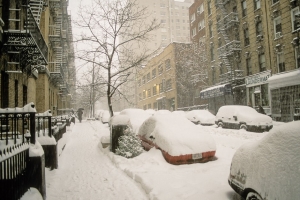 January 26, 2015 (San Diego)--If you’re traveling to the Northeast, you may have a long wait. Over 7,700 flights have been grounded—and many may not take off for days.  That’s because the worst blizzard in years is slamming the region. The National Weather Service has issued a blizzard warning for a 250-mile-wide area where whiteout conditions may occur.

The blizzard brings dangerous conditions, with potential hurricane force winds and up to three feet of snow forecast in New York.  Other major cities impacted include Boston and Philadelphia. Altogether, over 50 million people are in the warning zone, which encompasses Massachusetts, Connecticut, Rhode Island, New York, New Jersey and Pennsylvania.

In New York, the subway has been shut down, along with schools and government offices—and on Broadway, the lights are dark.  Governors and mayors across the Northeast have declared emergencies, ordering closure of highways and streets to all but emergency vehicles and snow plows.

Coastal residents are warned that flooding and 75 mile an hour winds may occur. In New Jersey, people are urged to move inland and park cars in protected areas.

In Washington D.C., the House of Representatives postponed votes due to some Congressional members unable to catch flights to the nation’s capitol from their districts, CBS news reports.

Power outages are also likely to occur—and that may lead to a flurry of special activities.  Following the great New York blizzard and blackout of 1965, a baby boom occurred nine months later.  The same thing happened after Hurricane Sandy hit the East Coast, when a 10 to 30 percent increase in birth rates ensued.

According to Medical Daily, Dr. Jacques Moritz of St. Luke’s Roosevelt Hospital Center in New York explained these sudden outbursts of passion this way. “There’s no Internet and no cable,” he said, adding, “What else is there to do?”