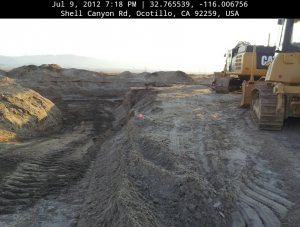 July 19, 2012 (San Diego’s East County) – After forensic dog teams identified dozens of potential ancient human remain sites at energy projects on Bureau of Land Management property in Ocotillo and McCain Valley, as ECM reported this week, ECM asked the BLM what steps it intends to take to assure that any Native American remains are protected.

Two officials from the BLM have responded to our inquiry.

“As a manager of America’s public lands, the BLM remains sensitive to the cultural resources found on our public lands and works closely with Native American tribes to ensure that any Native American human remains are handled respectfully according to the applicable legal requirements,” Erin Curtis, media relations and public affairs for the BLM in Sacramento wrote in an e-mail to ECM.

The BLM manages cultural resources located or discovered on public lands according to a set of established laws, policies and procedures, including the Native American Graves Protection and Repatriation Act (NAGPRA) and the National Historic Preservation Act (NHPA). 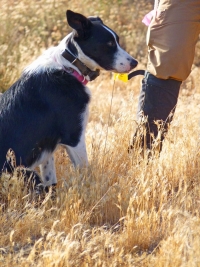 CM asked whether the BLM has notified the coroner or taken any steps to identify the remains or protect them, or to require a broader assessment of the site for cultural remains, given the numerous dog alerts and the fact that multiple tribes refer to this area as the “Valley of the Dead.” Additional sites have been found in McCain Valley, site of Iberdrola Renewables' planned Tule Wind facility.

In response, we received a call from Stephen Razo, director of external affairs with the BLM’s California Desert District office in Moreno Valley.

“We are in a quandary with your questions because we are under litigation,” he said, citing four lawsuits including one filed by the Quechan Indians.  “That pretty much puts the kabash on discussing some of the items that are of interest.” He added, “We are getting a Solicitor opinion on how we should respond in the future on any media inquiries.” That said, he indicated that he would answer whatever questions he can.

Asked if the coroner has been notified or not, he replied, “Do we ccall coroner every time a dog sits down? No.  The coroner is only called when bones are found.  I certainly understand and appreciate that if the dog sits down, there is something there. We certainly need validation of that before a coroner would come out.”

Finding bones would seem unlikely, given that local tribes have long cremated their remains.  The dogs, from the Institute of Canine Forensics, are the only ones in the world specially trained to locate ancient human remains.  To pass certification, a dog must find every ancient bone hidden in the testing and alert within one foot of the site.  The same teams have successful located bones up to 3,000 years old, as well as hundreds of forgotten gravesites in a ghost town in a project funded by the California State Parks Service.

Asked why Pattern Energy has not been required to fund the searches, Razo replied, “The use of forensic dogs is not required by law.  The fact that they are out there and Native Americans are paying for it is their choice…it’s public land they can certainly do that.”

ECM then asked what it would take for the BLM to step in and protect Native American remains from desecration, now that there are strong indications that Pattern's earlier assessment may have missed many cultural resource sites--and given that massive excavations are ongoing as turbine foundation holes are dug and new roads are graded.

“Those things will be discussed and brought up in the litigation,” he said, adding, “We are under litigation from four different sources so it would be wrong for the BLM to respond.”

In short, it appears that tribes’ only hopes of protecting their ancestors’ graves from desecration is in the courtroom, barring a decision by Pattern Energy to voluntarily  avoid all identified sites or abandon the project.  Thus far, Pattern has cooperated with tribes in relocating some turbine sites.

But as the dog searches continue to locate a growing number of likely ancestral cremation sites, will that spirit of cooperation continue?

Razo summed up the sentiments of all involved with regard to the pending litigation. “ I would hope that this moves quickly,” he concluded, “so that we can get these questions answered.”