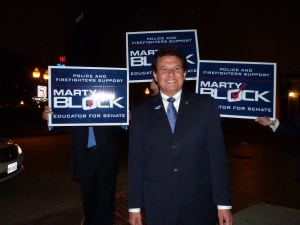 With 100% of precincts counted and only absentees remaining, Block has captured 57.4% of the vote, while ex-Assemblyman George Plescia got 42.57%.

Chairman of the Assembly Higher Education Committee, Block previously served as a professor and assistant dean at San Diego State University. Read ECM’s  interview with Block during the election here:  http://www.eastcountymagazine.org/node/11507 . In the Legislature, he has fought to make  higher education more accessible and affordable for students.

Block had backing from teachers and other educators, as well as firefighters, nurses, law enforcement and the Sierra Club.

His opponent drew fire for airing deceptive ads during the campaign.  But the tactic appears to have backfired.  Block’s race was one of several viewed as key to enabling Democrats to win a supermajority of two-thirds in the State Senate.  Democrats also won a two-thirds majority in the Assembly—enough to pass budgets and enact legislation unilaterally that have long been opposed by the minority party.

“I think we can finally break the stalemate we’ve had for all these years in Sacramento,” Block told the North County Times in a post-election interview.

Block’s former Assembly seat will be filled by Dr. Shirley Weber, also a career educator.  A San Diego State professor and former head of the San Diego Unified School Board,  Weber becomes the first African-American elected by San Diegans to serve in the California Legislature.

Voters also enacted Proposition 30, the Governor's measure to secure funding for K-12 and higher education, by a substantial margin.