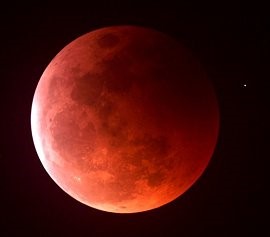 April 14, 2014 (San Diego)-- Tonight, San Diegans will be able to view a rare astronomical sight:  a blood moon, which is an unusual type of eclipse in which the moon appears red or orange.

In fact over the next year and a half, this phonemenon will occur four times.  The red color of the moon is caused by a shadow cast by the earth.

If you miss tomorrow’s sighting on April 15, the next blood moon eclipse will occur on October 8 this year, followed by two more next year on April 4 and September 28, 2015.

To see the blood moon Monday night or early Tuesday morning, you’ll need to stay up late.  NASA will have a live web chat to answer questions started at 10 p.m. Pacific Standard Time, with the eclipse starting around 11 p.m when the moon  begins to glide into Earth’s shadow.  The full blood moon — a coppery red sphere — will be visible an hour later, around midnight, and should stay that way for over an hour, NASA predicts.