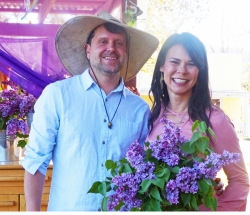 April 2, 2017 (San Diego’s East County) – There’s still time to bring home a bouquet of fragrant lilacs as the Lilac Festival continues in its final day of the season at Fort Cross Old Timey Adventures today.  It’s all part of a revitalization of new activities reclaiming the region's  historical roots along Highway 78 just outside of Julian in San Diego's East County.

Julian is now the third largest lilac producer in southern California, explains Jesse Cross, watching as a group of delighted children add sticks to stoke a fire for boiling down lavender oil  to make candles and other sweetly-scented delights. Visitors can enjoy many other activities on the 12-acre Fort Cross site, five of which are planted in lilac thickets. The remaining meadows and oak groves provide space for activities open to the public and private groups. These range from learning the lore of Kumeyaay Indians and pioneer settlers, as well as hands-on skills such as archery, pottery, tomahawk-throwing, playing in a jug band and dancing in a hoedown. 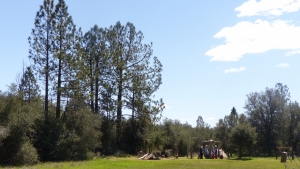 Jesse and his wife, Doreen, have been running the lilac farm for the past two years, taking over a neglected grove of lilacs and live oak trees originally planted by Woody Barns, owner of the former Manzanita Ranch. There are also a few towering pines and views of Volcan Mountain and Cuyamaca Peak.

“I came out from South Dakota after high school,” says Jesse,  who grew up in a town near Mount Rushmore and later moved to Yucaipa in northern California, where he helped his grandfather operate a 700-acre apple farm.

After his grandfather died,  Jesse’s family moved to Julian, attracted by the climate and year-round traffic.  Jesse’s mother owns the farm, renamed Fort Cross after the family surname. His brother, Ryan Cross, operates the Julian Mining Company across the street, where this weekend you can also stop by there to try your hand at gold panning, make a birdhouse, or visit arts and c 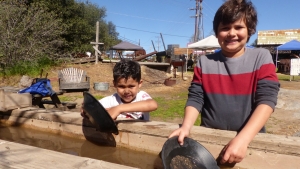 Julian is known for its apples and lilacs, two crops that require a cool climate. Lilacs need 1,500 hours of freezing temperatures each year, he says.  By the time the family acquired the lilac farm, Barns had sold it in the interim to Orfila Vineyard, which focused on wines; neglect was taking its toll as drought left lilacs struggling to survive and bark beetles ravaged many oaks. 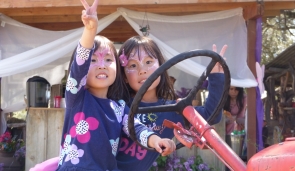 But farming has changed.  Today, he explains, “You don’t make any money off the apples or lilacs.”  The money is made off of ecotourism activities – the real gold in Julian today. “Our mission is all hands-on stuff.”

A visit here is a child’s delight.  Youngsters pet baby bunnies and pick up chicks. They may help plant a garden.  Two girls, Baylin and Allison Wang, faces painted like butterflies or fairies, scramble onto a tractor to pose for pictures. 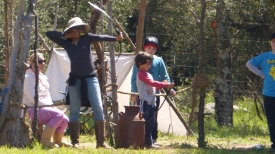 Families enjoy a hayride around the farm,  narrated by Jesse, who gets them singing and clapping, also showing them the oldest one-room schoolhouse left in San Diego County. We catch of glimpse of children and adults trying their hand at archery.

“I’m a musician,” he says.  “We play the old jug band.”  Earlier he played the guitar while guests played instruments ranging from a washboard to a tambourine.  A sing-along session and music jam also included a hoedown complete with dance lessons. 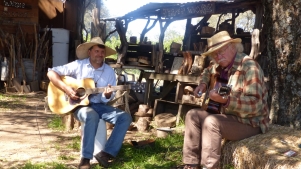 “We’re building a native village with a wikiiup,” says Jesse,who also hopes to add a fort with displays ranging from blacksmithing to glass blowing. Sometimes, school kids or scout troops come for overnights with rustic camping experiences.  They learn how to grind acorns or even skin a rattlesnake and eat it.  The site also has a cider press and during the fall months, a pumpkin patch and more.

The lilac season used to start in April, but now begins in March with the climate shifting.  If blooms aren’t sold to visitors quickly, they must be wholesaled off or lost.

Lilacs go back to the Greeks,” says Jesse.  There are many varieties such as striped and double-bloom versions. Fort Cross sells three:   the 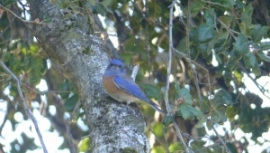 old-fashioned Common Eastern Lilac, all-white Martha Washingtons popular for weddings, and French double-blooms, which are “amazing but really hard to pick” since they must be plucked just as they begin to bloom.

If you're lucky, you may even spot some local wildlife, such as the bluebirds flitting among the lilac groves when I stopped by yesterday.

Across the street, the building that formerly housed Manzanita Ranch’s store and the Orfila wine tasting room has been totally revamped under its new owner, Albert Lewis.  Now called Julian Station, the interior how has a series of rooms where you can taste everything from hard cider, beer, mead, Mexican fruteria drinks and  chocolates , to wines from many local wineries. There are also shops sellin

g wares ranging from cowboy memorabilia to clothing and antiques.

Jesse’s brother, meanwhile, is busy sprucing up his  Julian Mining Company, too, which stands on the original homestead site of A.E. “Fred” Coleman, who discovered Julian’s gold and started the gold rush back in 1869 that drew Confederate soldiers and freed slaves alike to grow this charming mountain town.  He’s added gem screening and gold panning,  and coming soon, a mini-mine train ride.

During Gold Rush Days, Serah and Marshall Ayers (photo, right) will help you learn skills such as dough rolling or washing laundry outdoors. You can visit a bottle house or  shop for Native American jewelry, hand-embroidered table runners and much more.

Fort Cross is located at 4425 Highway 78, on the right side of the roadway just before you reach downtown Julian. The address is Santa Ysabel, according to the Fort Cross website. But other businesses along a two-block stretch of highway here list Wynola or Julian as parts of their business names, including Julian Mining Company and Julian Station across the street, plus some wonderful restaurants just a couple of blocks farther along: Jeremy’s on the Hill in the quaint yellow house on the left, and Wynola Pizza, in the big red barn on the right. 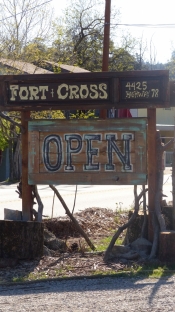 It’s a community undergoing a renaissance—and definitely worth a stop on your way to the heart of Julian. Better yet, plan to spend a day exploring the new and unique attractions along these lesser-known outskirts in  the place where the gold rush town’s pioneer roots began, and before that, where Native American Kumeyaay also lived during their seasonal migration from the desert to the sea. You can learn about all of this and more at Fort Cross Old Timey Adventures. 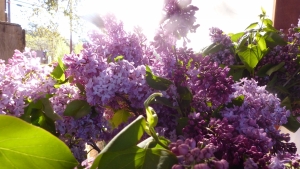