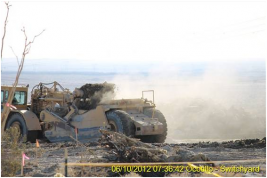 June 13, 2012 (Ocotillo) – Why hasn’t the Bureau of Land Management taken steps to protect Ocotillo area residents from clouds of dust in an area with high rates of childhood asthma and where soil reportedly contains potentially deadly Valley Fever spores?

“This issue has been ongoing from the start of this project and someone needs to get control of it before there is serious health related issues,” said Jim Pelley, an Ocotillo resident, engineer and ECM award winning photographer.

On June 10, Pelley informed ECM that he could see the dust cloud from his home. That's over three weeks after he lodged his first complaint.

“The dust was headed directly east toward the Ocotillo Community. “Why is this being overlooked and not taken seriously?” he asked, after filing various complaints that have gone unheeded by public health officials. “This is undisturbed land and I am really worried about the spores in the ground and the possibility of my family contracting Valley Fever, a deadly disease.”

Pelley provided photos and video documenting the massive dust plumes on different dates at the project site. The first was shot on May 17, one day after he filed his first complaint with the Imperial Valley Air Pollution Control Board: http://www.youtube.com/watch?v=fBRLNHRgBy8&feature=plcp

Despite project mitigation requirements to control dust with water, Pelley wrote at the time, “No water trucks in sight; no water on the ground, dust can be seen for miles blowing right into homes and the County Park where kids play.”

ECM has contacted the Imperial Valley Air Pollution Control Board for comment, but the agency has failed to respond. Pattern Energy has repeatedly refused to discuss its wind facility project despite multiple requests.