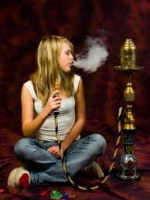 October 26, 2010 (Spring Valley) Despite disapproval of two County agencies and community groups, the County’s Planning Commission gave the thumbs up for an Alcoholic Beverages commission (ABC) license allowing beer at Blue Flayme, a new Hookah lounge in Spring Valley. The Commission overturned a decision by the Department of Planning and Land Use (DPLU), which opposed the license.

Hookahs have been linked to serious health hazards.  Now, the new trend of combining Hookah smoking and alcohol consumption locally has many in the community up in arms.

“It concerns me that we just banned smoking cigarettes in almost every place possible, yet now you can smoke tobacco in another form and skirt the law,” say Debra Gilly, a Spring Valley activist. “It also concerns me that more teens are getting involved with this activity and combining it with alcohol is a recipe for disaster.”

Hookahs have been used in the Middle East for centuries. Now the influx of Middle Eastern immigrants and refugees has led to a rise in hookah lounges locally, with some becoming popular hang-outs around colleges and even high schools. The smoker places a piece of sweetened tobacco in flavors ranging from banana to mint in the hookah’s head or bowl, then covers it with foil and lighted charcoal. Smoke is then inhaled through a long hose.

“What it comes down to is that they’re smoking sugar,” Firas Haddad, owner of Sinbad’s hookah lounge in Pacific Beach told the Union-Tribune. He said tobacco used in his hookahs had only 0.3 percent nicotine and no tar. Other advocates of the practice maintain that hookah smoking is a social and cultural practice that should not be regulated.

But serious health concerns have been raised by credible health experts over hookah smoking.

"Hookah smoking is not safer than cigarette smoking," the Mayo Clinic website states, noting that:

A 2005 report by the World Health Organization documented potential health hazards, noting that “a typical 20-80 minute hookah session, a person may take 50-200 puffs of smoke, and that each session produces about as much smoke as the amount received from smoking 100 cigarettes.” WHO also found that smoke from hookahs contain high levels of toxic compounds including heavy metals, carbon monoxide, and cancer-causing chemicals.

In a 2006 article titled “Hookahs a health hazard?” the San Diego Union-Tribune interviewed Dr. David Burns, a University of California, San Diego professor of family medicine who was an author of the WHO study as well as several U.S. surgeon general’s reports on tobacco.

Burns concluded that hookah smokers also face “the additional risk of transmitting communicable diseases by sharing the tips of the pipes.” Those range from the common cold to potentially lethal conditions such as hepatitis.

East County residents raised concerns beyond direct health impacts of hookah smoking combined with alcohol consumption. The area that the Spring Valley Hookah lounge will be in was designated a high crime district by the Sheriffs Department due to calls for service. The parking lot is already home to two other ABC licenses and is within close proximity to fast food establishments and Monte Vista High School.

Concerned parents and residents noted that public safety issues associated with over-saturation of alcohol include driving under the influence (DUI), domestic violence, assaults, and unplanned pregnancies.

“Does Spring Valley just want to approve every ABC license because the economy is tough?” This question was asked by Marilyn Wilikinson, a community member. “We have to remember that once an ABC license is in place, it is there for good.”

Correction: An earlier version of this story stated that DPLU approved the license.  It was the County Planning Commission that granted approval, overturning a decision by the DPLU.

Instead of trying to find an alternative such intoxicants should have been completely prohibited. It was also surprising to read about the lowering of drinking age from 21 to 19 yrs. Records shows that the number of people who die in road accidents are highest in the country. We cannot expect our teen kids to act like matured people in certain situations. Colorado homes for Sale

If the community and qualified professionals are given the opportunity to voice an opinion, why aren't their voices and expertise taken into consideration? Better to just not ask them than to ask them and then insult them by ALWAYS showing blatant disregard for them. The DPLU and ABC don't ALL live in this community but feel that the people who do shouldn't have a say. I understand the cultural issue, but when are adults going to understand that reducing youth access to alcohol far outweighs the cultural issue of hookah? The only safe thing to be taking into your lungs is oxygen. Anything else, for the most part, is unsafe. So now our young people can go to Spring Valley, start on the road to tobacco dependence, lung cancer and be intoxicated while they're doing it. Good job, DPLU and ABC!

I read about smoking of a hookah much and it turns out that the hookah is less harmful than cigarettes or cigars. In cigars the considerable quantity of nicotine and pitches and though their smoke we do not inhale hit of harmful substances contains occurs under language. In cigarettes average quantity, but we all that inhale in lungs that is the extremely harmful. And in a hookah tobacco from 0,1 % to 00,1 % of the maintenance of nicotine and pitches. This tobacco soak in special to spirit and at smoking we inhale aromatic oils which do not bear harm to health. In this tobacco carbonic oxide which we is harmful only we inhale in plentiful quantities and more than in all other methods of smoking