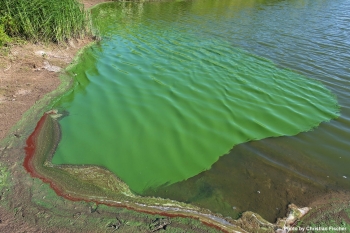 So what exactly is blue-green algae?

According to the California Water Boards, blue green algae, also known as cyanobacteria, can cause harmful algae blooms that produce toxins when a combination of warm temperatures, stagnant water and excessive nutrient inputs occur.

Located in the community of Campo off Buckman Springs Road and Lake Morena Drive, Lake Morena County Park is a popular camping and fishing park. Because of its location sitting at an elevation of 3,000 feet above sea level southwest of the Laguna Mountains, the park showcases characteristics of desert, coastal, and mountain habitats. The lake, connected to the City of San Diego’s Barrett Reservoir, is the highest and most remote reservoir in all of San Diego County, which technically is owned by the City of San Diego. But the County of San Diego Parks and Recreation controls all of the recreational activities on the lake and handles all monitoring of the lake’s water levels and quality.

According to Jessica Geiszler, the County of San Diego’s Marketing and Public Outreach Manager, the levels of bacteria are regularly monitored and tested by the County.

“Our Rangers monitor the lake to identify areas of concern. Blue-green algae -- which occurs naturally and thrives in warm weather and shallow water – is present in some parts of the lake. However, our most recent tests (received this month) confirm the cyanobacteria produced by these algae blooms are below California State levels of concern,” Geiszler says.

She adds that testing completed by the City of San Diego in May confirms the water is both healthy and well- oxygenated. “If test results were to show levels of cyanobacteria that were high enough to warrant concern, we would post signs and inform park visitors, in addition to posting an alert on our website at sdparks.org.”

But the blue-green algae situation at Santee’s Lindo Lake County Park is not so rosy.

Geiszler says that Lindo Lake is different than Lake Morena in that it is the only natural lake in San Diego, and with that comes challenges – things like stormwater runoff and prolonged drought. “We are actively working to address these issues via a long-term lake restoration project. The project, which includes dredging, will bring increased water depth, an aeration system, a water movement system and additional run-off control measures,” she says.

Two water quality control measures have already been implemented to filter run-off that enters the lake from the west and south sides: One is a bio-swale and underground sediment retention basin, and the other is a modular wetland system that filters the water before it enters the lake.

“Better water filtration, flow and depth should curb the growth of blue-green algae in the future. In the interim, because blue green bacterial levels are high by California State standards, we have posted signs and web updates,” Geiszler says.

“If park patrons have concerns about these or any of our parks, we encourage them to report them to park staff,” she adds.

Health risks to people and pets

The algal toxins in blue green algae pose risks to the health and safety of people and pets, drinking water, and recreating in water bodies affected by blooms. They can also accumulate in fish and shellfish to levels posing threats to people and wildlife.

The health risks to dogs are even more serious as they can stop a dog's liver from functioning properly. Blue-green algae exposure is often fatal and can also cause other long term health problems in dogs that survive after drinking or swimming in blue green algae-contaminated water.

Swimming is prohibited in local reservoirs, though at lakes elsewhere in California, this is a concern.

With many swimmers and boaters expected at the state’s lakes, streams and reservoirs this Labor Day weekend, the California State Water Board is reminding the public to be mindful of harmful algal blooms, which may appear blue, green, yellow, brown or even red.

Report any suspected HAB or potential HAB-related illness to help authorities understand where problems are occurring and respond. HAB coordinators can also be contacted by phone  at (916) 341-5357 or  toll free at (844) 729-6466, or via email at CyanoHAB.Reports@waterboards.ca.gov.

I recall when many years ago Helix water had an algae bloom and it caused the potable water in El Cajon (at least) to taste dirty. I had to purchase a faucet mount water filter, and have been using them ever since.