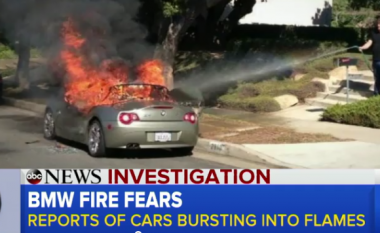 February 7, 2019 (Washington D.C.) – Despite more than 90 complaints of BMW luxury vehicles bursting into flames while parked with engines turned off, the National Highway Traffic Safety Administration is not actively investigating the causes.

ABC News first reported the problem back in May of 2017 and called for a federal investigation. Since then, more than 30 new BMW fires have occurred—and still the federal government has failed to take action to protect consumers, Jason Levine, executive director at the nonprofit Center for Auto Safety, told ABC this month

BMW has recalled over a million vehicles since that 2017 report ran. But ABC found fires have occurred recently among models not on the recall list.

The company has said it can’t find a pattern in the fires and claims fires can be caused by issues other than mechanical defects, including rodents chewing wires, improper maintenance, after-market modifications or arson. BMW notes that it has 4.9 million vehicles on the roadway and despite 90 fires, notes that such incidents are still rare.

But Levine says BMW is not doing enough. Some people who lost cars and homes due to fires caused by exploding BMWs have said the company told them this had never happened before.  Others have been pressured to sign non-disclosure agreements.

Among the victims are San Diego resident Laura Ohmeand her two sons, who fled for their lives when their BMW parked in their garage exploded. Their home burned to the ground. She wants BMW to “fix the problem.”

In South Korea, the government has held BMW responsible for vehicle fires. The company was fined $9.9 million by the South Korean government, which found that BMW tried to cover up technical problems that caused dozens of engine fires in diesel-powered vehicles.

He concludes, “The only thing keeping BMW’s feet to the fire, forgive the pun, is going to be outside lawsuits,” adding, “That’s not how it should work.”