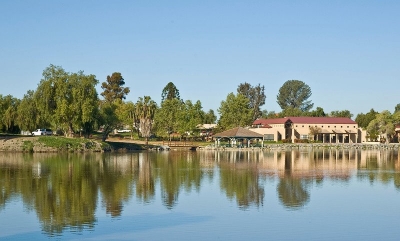 May 1, 2019 (Lakeside) - San Diego County’s Board of Supervisors voted unanimously Wednesday to move ahead with a $7.5 million first-phase improvement project for the popular Lindo Lake County Park in Lakeside.

The approved phase is expected to improve water quality in Lindo Lake’s east basin by deepening it, adding water to it and taking steps to keep sediment out of it. It will also build a fishing pier and bird-watching station, add picnic tables, benches and water-efficient irrigation, and restore native habitat.

The work is expected to begin this winter and be completed in the summer of 2021. A second phase of the project to restore the west basin is expected to be brought to the Board as the first phase nears completion.

Board Chairwoman Dianne Jacob, whose second supervisorial district includes Lakeside, said Wednesday that the improvement project was long-awaited by the Lakeside community. Lakeside was built in the 1800s around Lindo Lake, the only natural lake in San Diego County.

“To have a fishing pier, and a bird-watching station,” Jacob continued, “and  also to restore the habitat in this area and have water-efficient irrigation around the basin—this is really awesome.”

Supervisors voted Wednesday to authorize the County’s Department of Purchasing and Contracting to advertise and award a contract to accomplish the first phase improvements.

Lindo Lake was cut off from its natural source of replenishment in the 1960s when a dam was built upstream on Quail Creek to create Lake Jennings. That move, over time, has helped shrink the amount of water in Lindo Lake, split it into two basins and deteriorate its water quality. The lake is primarily replenished by urban and stormwater runoff from surrounding hillsides and groundwater.

The 55-acre Lindo Lake County Park is located on Vine Street in Lakeside.

For more information about County parks and Lindo Lake County Park, go to the County’s Parks and Recreation website to find the park's webpage.