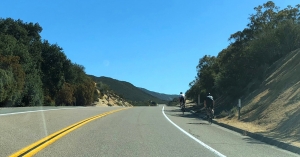 October 31, 2018 (San Diego) - The San Diego County Board of Supervisors approved a new plan Wednesday that could eventually add several hundred miles of safer, more convenient bicycle lanes to roads in and around unincorporated communities.

The Board voted 4-0, with Supervisor Ron Roberts absent, to approve a new Active Transportation Plan, the first update of the County’s bike plan since 2003.

The plan will be used to guide the potential addition of bike lanes or bike lane improvements when road projects in unincorporated communities, including resurfacing and repaving, are planned and built in the future.

The transportation plan aims to give County residents healthier opportunities to get around, exercise and have fun, by biking rather than driving on unincorporated roads. County officials said the plan fits in with the County’s Live Well San Diego vision and its Climate Action Plan, which is designed to reduce greenhouse gas emissions in unincorporated communities.

Improvements in the newly adopted Active Transportation Plan would more than triple the potential miles of future bike lanes, from 280 miles to 934 miles, putting in striped markings dedicating space for bicyclists that would improve safety for both bicyclists and motorists. In addition, the plan could also potentially add 22 miles off-road bike lanes that are completely separated from traffic.

The County’s Department of Planning & Development Services has been working on the new plan since 2015, holding three regional workshops, one each in Vista in the North County, Bonita in South County and Lakeside in East County, and meeting publicly with County planning advisory groups in Campo-Lake Morena, Julian, Ramona, Twin Oaks and Valley Center.

The County of San Diego maintains more than 2,000 miles of roads in the unincorporated areas.

The plan was developed with a $500,000 grant from the San Diego Association of Governments.

Great idea! Olde Hwy 80 is so dangerous to walk or bike on.