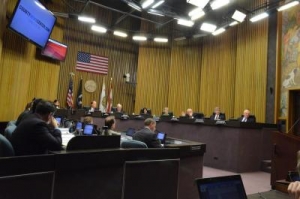 April 12, 2013 (San Diego)— County Supervisors directed the Chief Administration Officer, by a 3-2 vote, to come back in 120 days with options for a comprehensive renewable energy plan, including time and cost estimates. The measure was introduced by Supervisor Dianne Jacob, who believes it is time to stop the ad hoc way of authorizing each proposed energy development.

Jacob, who represents the 2nd district in East County where most of these projects are proposed, said before the vote that this is “a double edge sword” for her.  Projects already underway will be grandfathered in and not affected, according to Jacob’s instructions. She emphasized this point to Industry members present who raised opposition to this plan. 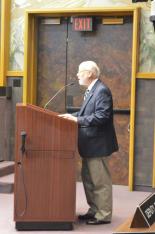 Jay Powell, a Sierra Club representative, spoke in support of the Planning Commission recommendation.  He added that there is a need to review urban development plans before we go and site these projects in undeveloped areas. He emphasized that “rooftop solar should be the first priority.” He finished by reminding the board, “Technology is outstripping the regulatory environment.” 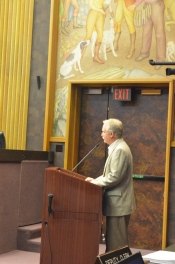 Developer John Gibson, of CLEANtech San Diego, representing many renewable energy companies, warned the County that with this “wind ordinance, you will not have another industrial wind project in this county.” This will run companies away.

Supervisor Ron Roberts countered that the intent was not to make this restrictive.

Jason Anderson, also representing the industry, said that he was rising to oppose this plan. “It is a way to stall or slow down projects in the East County.”

Both industry representatives argued that the proposed plan favors activists. Gibson testified that “The activists believe the world goes around Boulevard and it does not.” We all need electricity; even the people at Boulevard consume it, he insisted.

The community of Boulevard faces numerous proposed projects including four major wind projects and a half dozen or so industrial solar projects in or adjacent to the rural town, including scenic and riparian wetlands. Residents have voiced  concerns over fire danger, destruction of views and wildlife habitat, as well as health impacts of infrasound, noise and stray voltage citing health issues and high levels of stray voltage/infrasound measured in homes near existing wind turbines in nearby Campo.

When the time to vote came, Supervisor Dave Roberts said that while he was a life long member of the Sierra Club he could not support it at this time. Why? He has learned in his short time on the Board of Supervisors, that “things at times are not what they seem.”

Supervisor Bill Horn said that he could not, since “I don’t like the idea of taking four months and creating a plan.” He also believed that it was up to each property owner to do as he wished with his property, and creating lines for use was not to his liking.

Supervisor Greg Cox joined Supervisor Ron Roberts in his support for the plan with “some nervousness.”

After the vote, Pete Hasapopoulos of the Sierra Club told ECM that “they made the right decision. This County needs to take a deep look at all the opportunities for local clean energy and take the haphazard approach out of the equation.” He also said that a few of the Supervisors do not realize yet “the current growth rate of roof top solar, and energy efficiency.”