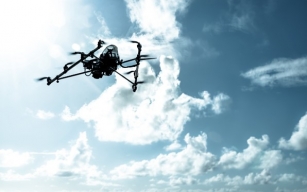 October 10, 2017 (San Diego) -- The San Diego County Board of Supervisors voted Tuesday to restrict drones from flying near or over fires and locations that have public safety temporary area restrictions to ensure public safety.

The emergency ordinance, passed during peak fire season, applies to the unincorporated areas of San Diego County and takes effect immediately. It will restrict civilian drones from launching, flying or landing within three miles of a firefighting operation or a designated area with temporary restrictions. Any violation would be a misdemeanor crime. All board members present voted in favor of the ordinance.

The ordinance will give news media an exception to cover a disaster area as a way to inform the public, as long as it does not interfere with emergency operations, County News Service reports.

In wildfire situations, the presence of a civilian drone in an area where aerial firefighting resources are flying interferes with emergency operations. If a civilian drone is seen in the area, it results in the immediate grounding of firefighting helicopters or planes until the drone can be removed, which delays dropping water or fire retardant to slow the spread of a blaze.

This action is also for firefighter safety which includes preventing mid-air collisions in conditions where visibility is often murky due to smoke. Since water drops from the air are one of a fire agency’s best tools to stop or reduce flames, the withdrawal of air resources leaves a fire to grow putting lives and property at risk.

Law enforcement can also designate a temporary area restriction, in situations of potential unrest such as the prototype border wall construction project in Otay Mesa. Objects that could be used as weapons are prohibited in a temporary area restriction. In these situations, the Sheriff’s Department or other law enforcement, may need to operate a helicopter or drone to monitor the area, so civilian drones would interfere with public safety.