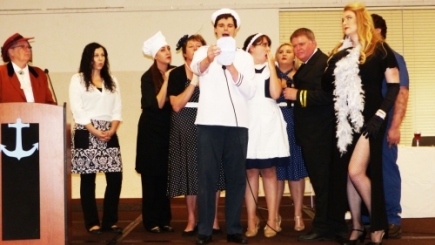 June 5, 2018 (La Mesa) – It’s not every charity dinner that starts off with  cruise director Sue Nami (played by Janette Mills) welcome you aboard a 1949 cruise ship--or with a wine bottled labeled “rat poison” as the centerpiece.  Not to mention a billionaire bikini designer turning up dead – with a boatload of suspects and the entire audience helping to solve the crime.

That was the scenario at “Boats, Bodies and Betrayal,” a murder mystery dinner theatre produced by Kiwanis Club of La Mesa and Kiwanis Youth Development and Support Club of San Diego (KYDS) last Sunday evening at the La Mesa Community Center. 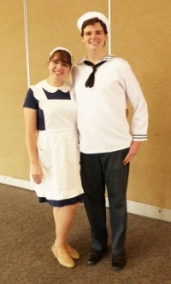 The second annual murder mystery production for Kiwanis was written by Rickie and Emma Santer (photo, right) a husband and wife team who have written three previous murder mysteries, each with a different theme set in the ‘20s, ‘50s, and in a fairy tale setting. 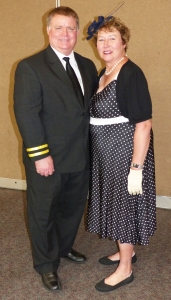 g to Europe in two weeks and we hope to write some more on the plane,” she says.

In real life, he’s a teacher and she works for the March of Dimes.  They met in college at Adelphi University in New York and began writing plays in their spare time.  In “Boats, Bodies and Betrayal,” the playwrights also have acting roles, portraying first mate Al B. Tross  and maid Cora Reef.

All of the characters have names with a nautical theme; just read them out loud:   Captain Barney Cull (played by Gary Jander),  vampish singer Anne Core (played by Rachael Jander), and crew member Roe Yaboat (Ashley Kinan), to name a few.

After the victim, Ty Dahl ([played by Tyler Groh), is found dead of rat poisoning after an argument with the captain, Al B. Tross takes charge to gather all the evidence, hear from witnesses and try to solve the murder. Seemingly everyone is a suspect. 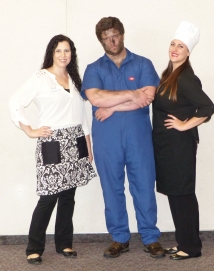 Was it the philandering victim’s wife, Sandy Dahl (Lisa Watson) who stands to inherit a fortune?  His jilted mistress?  Cook Avo Cado (Alli Turrell), who had easy access to poison his food?  Mechanic Mack E. Roll (Corey Groh) whose urgent need for cash is discovered after the victim’s money is found missing?  The captain or his wife, Nadia Cull (Donna Jander) who seems quick to accuse anyone other than her husband?  Emcee Wally Russ (Bruce Chase), the only one wearing gloves?  Or someone else? 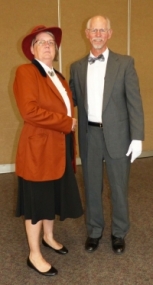 Characters stop by the tables, chatting with guests and professional their innocence while pointing the finger at other cast members.

In between courses of salad, spaghetti with meatballs and dessert served up by Helix High School Key Club members, the the audience – aka cruise ship guests, are provided a packet with clues passed out to each table. Every guest is invited to write down who they believe is the

guilty suspect, and their rationale as to why.

The winner received a prize, while others took home silent auction and drawing items in addition to remembrances of a uniquely entertaining evening that provided a boatload of rollicking fun for all.

Kiwanis is a global nonprofit organization focused on helping children.

Bob Battenfield, (photo, left) past president of Kiwanis’ La Mesa chapter, says the local club started in the 1940s  He is a former public relations professional whose

Next up, the group will be hosting Twilight Tasting on the Trails in October at Mission Trails Regional Park.

La Mesa Kiwanis meets the second and fourth Thursday of each month from 6 to 8 p.m. at Marie Callander’s Restaurant on Alvarado, near 70th and I-8. 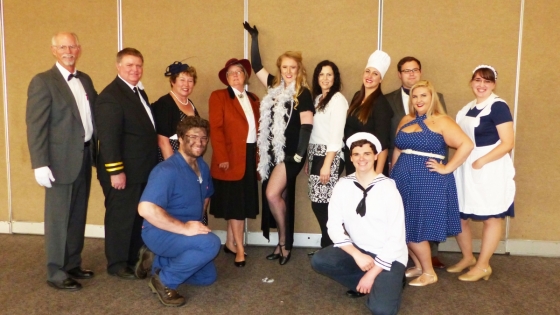