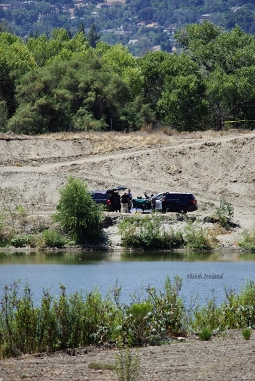 Update August 14, 2022:  The Medical Examiner's office has identified the 50-year-old man as Thomas Moreno. Moreno's family have been notified of his death. The cause and manner of his death remain under investigation, the Sheriff's office reports.

Updated August 1 at 5 p.m. with additional information from the Sheriff's department.

August 1, 2022 (Lakeside) -- The body of a man around 50 years old was found this morning in a pond south of Willow Road near Moreno, east of State Route 67 in Lakeside. The Sheriff's Search and Rescue Dive Team responded to a call and recovered the body.

The man was wearing shorts with no shirt. Authorities indicated there were no obvious signs of trauma. The vicitm may have gone swimming and drowned, though the County Medical Examiner is slated to conduct an autopsy to determine the cause and manner of death.

At this point the death is suspicious in nature however, there is no indication of foul play. The circumstances of this incident are still under investigation," says Lieutenant Chris Steffan.

"We think we know who he is; we are waiting on family to identify him," Sergeant Jay Wilson with the San Diego Sheriff's department told East County Magazine.

Sgt. Wilson added that the victim "most likely"  was homeless.

A photographer from Shiloh Ireland photography covering the breaking news story for ECM says that a tent belonging to a homeless man has been camped near the site for some time.