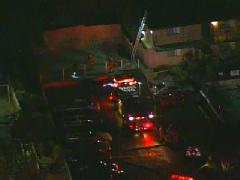 Update October 19, 2011: The San Diego Medical Examiner reports the body was a 65-year old man who died of smoke inhalation.  His identity has not yet been released.

October 14, 2011 (Spring Valley) – A fire that engulfed an apartment complex at 3536 Sweetwater Springs Boulevard early this morning was initially suspected of being set to cover up a murder. However, authorities now say that they have ruled out foul play.

“The Sheriff has been called because several persons reported hearing gunshots,” said Leonard Villareal at San Miguel Fire Department. He confirmed that a body was found in a second-story apartment and approximately seven people suffered injuries.

Two persons have been transported to a hospital with respiratory and possible heart problems. In addition, he revealed, “An undisclosed odor was detected so Hazmat was called and they are at the scene….At the evacuation center a 7-year-old began vomiting and three others became ill,” he said, adding that cause of the illnesses is unknown.

Firefighting crews arrived around 5:30 a.m. to find the apartment fully engulfed and went into “full rescue mode,” according to Villareal. After extinguishing the fire and finding a body, the Sheriff’s Department was called to what is now being treated as a crime scene.

Identify of the victim and cause of death have not yet been determined, however 10 News reports that a San Diego Fire-Rescue source called the cause “very mysterious.” Concern has also been voiced by officials that the person responsible could be in the area.

Approximately 100 residents were evacuated to a nearby park-and-ride, where Red Cross has set up a station. “These people are being kept together because they are fire victims, witnesses, and possibly even a potential suspect in the group,” Villareal said.

One apartment unit was completely destroyed by fire and a unit below suffered water damage. Adjacent units also probably also suffered damage, Villareal said. However the evacuation area remains larger due to the crime investigation as well as fire-related damage.