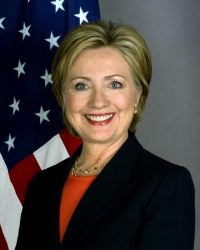 Clinton did not use an official government e-mail account, sending all of her e-mail through her own private server while she was Secretary of State.  She and her staff have turned over 55,000 pages of emails to the State Department for archiving, upon request.

But the former First Lady and likely presidential candidate has drawn criticism after revelations that she deleted over 30,000 emails that she claims were personal from her years heading up the State Department.

Federal officials by law are supposed to retain all public records for posterity, and while use of private email was not illegal, it has more commonly been used only occasionally, not exclusively.  Clinton’s actions raise questions over whether official documents or evidence could have been destroyed, as well as whether security of diplomatic communications could have been compromised.

Republicans want Clinton to turn her server over to an independent arbiter.

The House Oversight Committee Chairman Jason Chaffetz has suggested that his panel could subpoena her if she is not cooperative in its investigation.

While there are legitimate issues of concern, some Democrats have voiced concern that the Republican controlled House could have a partisan agenda to tarnish Clinton’s reputation, since she is considered the frontrunner for the Democratic presidential nomination in 2016.