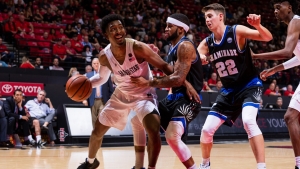 January 5, 2019 (Boise) - Derrick Alston had a career-high 30 points on 9-of-14 shooting and Boise State led by double digits throughout the second half in an 88-64 win over San Diego State on Saturday night.

Alex Hobbs added 18 points for the Broncos (7-8, 2-0 Mountain West Conference), who have won three of their last four games.

Devin Watson had 24 points and Jalen McDaniels added 14 for San Diego State, which made just 3 of 21 from 3-point range.

The Broncos shot 57 percent from the floor.

San Diego State had won six consecutive regular-season Mountain West Conference games and was victorious in its last nine games against conference competition prior to the game. The regular-season conference win streak was tied for the eighth longest in school history.

GET TO KNOW THE BENCH

SDSU played much of the game in foul trouble and had three player s foul out of the contest. As a result, the Aztec bench played 76 minutes, its highest total against a Division I opponent this season.