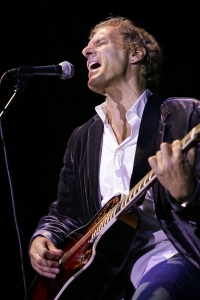 September 14, 2010 (Alpine)--Michael Bolton displayed the dazzling breadth of his talent in a concert at Viejas Dreamcatcher Lounge in Alpine Sunday night. His performances ranged from vintage classics by Sinatra and Gershwin to jazz and rock ‘n’ roll. Mounting a platform in the center of the audience, he sang his Grammy Award-winning version of “When a Man Loves a Woman” – much to the delight of women in the crowd. 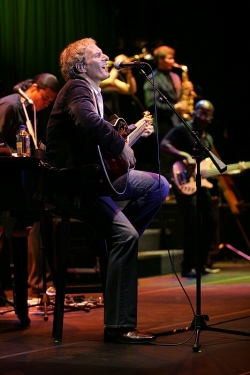 He also sang a powerful rendition of an aria from an Italian opera, dedicated to the memory of Luciano Pavarati, which whom he once performed. “Feel free to sing along,” he teased the crowd, then launched into a moving performance in which he seemed to be channeling the power of the famed late Italian tenor.

Danish saxophonist Michael Lington, a recent addition to the band, is a stellar musician in his own right and grandson of Danish composer/orchestra Otto Lington, bandleader for Fats Waller and other jazz legends. Lington’s impassioned performance, seemingly one with his saxophone, made it clear why he’s produced many Top Ten hits.