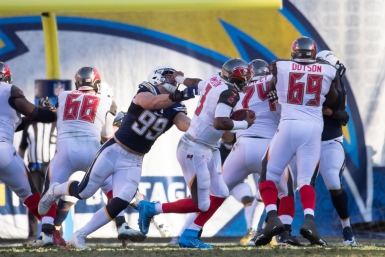 As usual, the Chargers got started right away with Philip Rivers’ pass to Dontrelle Inman, who made some fancy moves and dove into the end zone for the Chargers’ first score of the game on the opening drive.  San Diego went up 7-0.

But then, as is always the case of the NFL in 2016, the Chargers started to get bit by the penalty bug.  Thanks to those penalties and great passing by Jameis Winston, the Bucs were able to get close enough to the goal line so Doug Martin could punch it in.  The game was tied at seven. 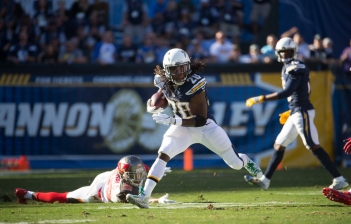 In the second quarter, the Chargers pieced together a smooth, effective drive to get the ball downfield and Melvin Gordon scored his 10th rushing touchdown of the season.  The Chargers were in front again 14-7 and took that score to halftime.

The Bucs marched downfield in the third, but the most they could get was a field goal, so it was 14-10.

The defenses took over late in the third and after a punt to the Chargers that put them at their own eight yard line, Lavonte David intercepted a pass and returned it the short yardage for the pick six.  Tampa Bay had their first lead of the game 17-14.  But Philip Rivers did what he does best.  He aired it from midfield to Tyrell Williams for the score and the Chargers reclaimed a four-point lead, 21-17.

Unfortunately for the Chargers, these aren't the Buccaneers of old; they didn't go away.  They crept to within one in the fourth with Roberto Aguayo’s field goal to make the score 21-20.  And then Winston showed why he was so good at Florida State.  He fired a bullet to Cameron Brate in the end zone and the Bucs took the lead.  They went for two and Winston showed off his skills again, evading Joey Bosa and firing a shot to Mike Evans and Tampa Bay led by a touchdown, 28-21.  They took that to the end as they win their fourth in a row and tie the Atlanta Falcons for first in the NFC South.  The Chargers fall to 5-7.

This week, the Bolts travel to Carolina to take on Cam Newton and the Panthers.  Kickoff is at 10:00 a.m. Sunday.